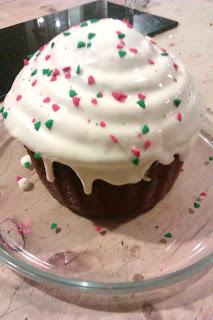 Success! I attempted the giant cupcake again and, unlike the unspeakable disaster that was the first attempt, this one went well with absolutely no issues, even when I discovered that there was no icing sugar!

I baked this cake for K as a Christmas present (hence the tiny Christmas tree sprinkles adorning the cake). For the innards I made the sponge a festive combination of red and green using the same method as for the rainbow cake. Unfortunately, because this was a gift, I couldn't cut the cake open to show you the inside but I do have a picture of the bits I cut off the cake to make it flat to give you some idea of what it will look like:

The difference between the process behind this beauty and the Disaster Cake (DC) was that I followed my own instructions from the DC post rather than the instructions that came with the cake mould. As a result, I did not end up with a cake and hat situation; the two cakes fit together seamlessly. Since making DC I have also learned how to sort out my buttercream issues, but that didn't matter in the end because there was no icing sugar in the house, and being the lazy soul that I am I didn't want to go and buy some more so I made a sugar syrup and stirred it into some cream cheese, then put it in the fridge until it was solid enough to decorate the cake with.

I am hence very pleased with this cake, and hope that K enjoys it! Monday's chocolate & banana loaf cake has already nearly gone; my sister called it very moreish and my Dad ate a fair amount too. I liked it as the bananas make it nice and moist and the chocolate gives a nice contrasting texture, and who can deny that banana and chocolate is an awesome combination? (Banana haters, pipe down!)

I hope this cake repulses you less than DC did, and maybe it'll even encourage you to try your own. Of course, you do need a giant cupcake mould, but these are widely available now so it shouldn't be hard to get hold of one. Try not to cringe too much at the quantities of ingredients coming up: remember, it's a giant cupcake! 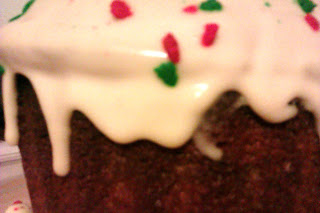 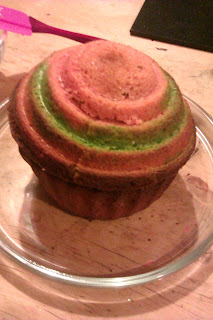 If you don't know what some of the above terms mean then please refer to The Basics. If you have any questions, don't be afraid to ask me either.
On Friday I'm doing some baking with S, so if it goes well I will post about it. If not, I've got an entry to the We Should Cocoa Challenge that also doubles as a Christmas present for my mother for you to look forward to on Christmas Eve. Happy baking!