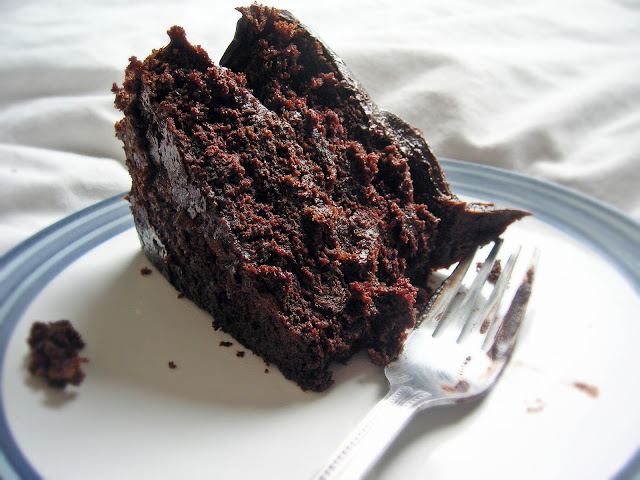 I've been craving chocolate fudge cake since I had a piece in Pizza Express a few weeks ago. I know it's a bit weird to start craving something after eating it, but I get that quite often with things that I don't have to hand in my house, for example I recently tried a new takeaway pizza place and could not stop thinking about when I might next get pizza from them again afterwards. Maybe I just have a problem.

I used sour cream in this recipe because several of my favourite food bloggers (though I can't find any examples of when they've written about it to hand) have mentioned lately that it is really good for making a moist cake. My cakes have never been dry, but I thought I'd give the sour cream a go to help with the overall Chocolate Fudge Cake experience.

The recipe for the icing is a combination of Hugh Fearnley-Wittingstall's Chocolate Fudge Icing (from The Telegraph's River Cottage Baking: Part 1) and the icing for Nigella Lawson's Devil's Food Cake (you need to make that cake) - I didn't have enough icing sugar for the Fearnley-Wittingstall recipe and the icing sugar that I did have was full of stiff lumps that no sieve could get rid of, so I decided to do away with that ingredient entirely and looked to Nigella to see what she did in the recipe for my favourite chocolate cake. I'm very pleased with the results - I would have liked a bit more of it so that I could ice the sides of the cake but you can't have it all, and to be honest I don't think that it was necessary because the finished cake tastes even better than I had hoped. 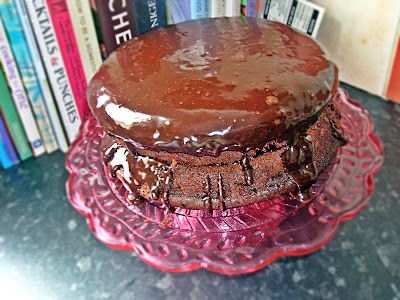 In a bid to make the cake a little bit healthier, I used mayonnaise instead of butter, just as I did for my Healthy Brownies. As I say, I think the cake tastes amazing but if you don't want to use the mayonnaise you can always just use butter. In a similar fashion, feel free to use full fat sour cream if you want. 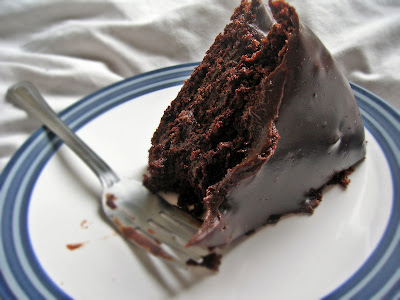 For more ideas on how to make your baking more healthy, take a look at Healthy(ish) Baking.

Exams are only a few weeks away so this is my last weekend off until they're over. That means that my posts are going to become a bit more sporadic until I'm free again (7th June, if you're interested), but I do have plans for something special next weekend. I've also got a hankering for banana and peanut butter cupcakes/muffins/loaf cakes thanks to Sniff and Snort's Banana Peanut Butter Cake from the cheese We Should Cocoa challenge (check the link out to see what Choclette made of my Cream Cheese, Chocolate and Rhubarb Cupcakes) so I wouldn't worry too much.

Speaking of blog challenges, I also entered the cupcakes into the One Ingredient Challenge because the theme was rhubarb - the round-up can be found here. I'll certainly be looking it up next time I'm stuck with some leftover rhubarb.

I've also made a twitter account for Cake Of The Week so if you're a twitter user you can now follow me. I don't really understand much of it yet, but I'm sure I'll get to grips with it soon enough.

Have a good weekend!