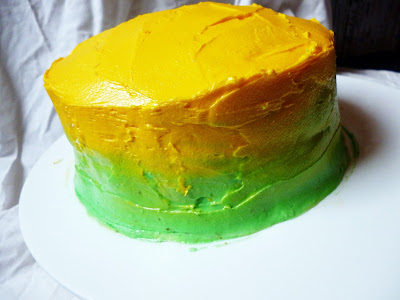 As more diligent fans will know, I've had the idea for this cake in my head for several weeks so I was very excited to finally bring my plans to fruition. I had my cheap Malibu (aka Bali), I had my pineapple chunks, and now I had the opportunity and the time to do it, having just finished my exams yesterday.

I'll be honest and tell you that the filling was a bit of an experiment. I knew that the basic ingredients for pina colada were coconut cream, pineapple juice and white rum so to bring out the pineapple flavour I wanted to make a pineapple curd. To do this, adapted the recipe for the lemon curd from the lemon meringue cake I made a while back, but used the syrup from the tin of pineapple chunks instead of lemon juice/rind and removed the cornflour. To my joy, the experiment worked! The pineapple taste is quite a mild one, which is good so it doesn't overpower the delicate flavouring in the cake. The curd also has a caramel-esque flavour to it, which was unexpected but added a depth to the flavour. I'm glad there was some left over! 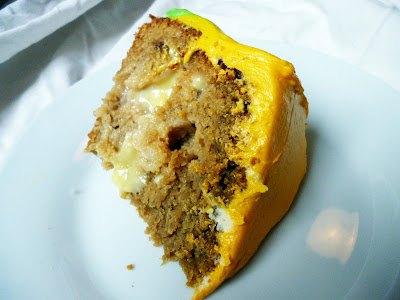 I had a piece of the cake about an hour ago and was very happy with how it tasted. None of the flavours stand out on their own, which is good, and they combine to give a satisfactory pina colada feeling as you eat the cake. Hooray! I'll definitely be making this again.

I only had 100g of caster sugar left and really did not want to face the horror that is Morrisons on a Saturday so I made up the difference with dark muscovado sugar, which worked very well so I'm leaving it in the recipe. It gave the cake a bit of a sticky toffee appearance, but this doesn't come across in the flavour at all. The notes from the muscovado just blend in with the Malibu and pineapple to give a tropical flavour. 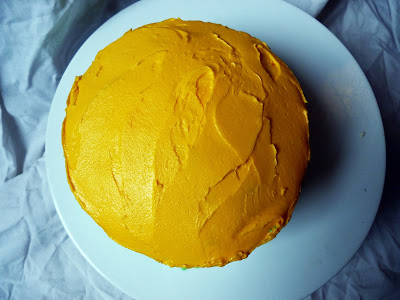 One final note before I give you the recipe: this does contain alcohol so if you bake the cake don't feed it to children!

Ingredients
For the Cake:

For the Pineapple Curd:
For the Icing:
Recipe 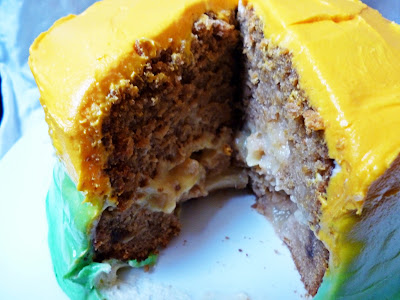 For next week I'm thinking of making a blueberry loaf cake reminiscent of one I saw in Tesco once but couldn't afford. I still have blueberries in the freezer from when I made blueberry muffins ages ago and this seems like a perfect opportunity to use them up.

If you need further instruction on anything mentioned in the recipe above, or don't understand something, have a look at The Basics. I'm thinking of adding a 'baking healthily(ish)' section to the page soon. I have so much free time now!

Anyway, I encourage you to bake this cake. It's very tasty, and good for celebration. It also brings a bit of a summer feeling into these winter months, I feel. Happy baking, and I'll see you next week.