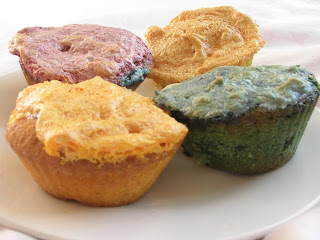 These E-number infested, melt-in-the-mouth wonders are both terribly good and terribly moreish. They come with four different fillings: lemon curd, lime curd, blackberry jam or strawberry jam. I tried to make the colours of the cakes and meringues reflect this, but the pink meringue turned purple in the oven and the green meringue colour faded to yellow with heat. The way that some of the colours decompose like this with heat is quite interesting, but also frustrating when all I wanted was a nice selection of colour for my cakes (it could also explain why the red velvet sponge in the valentine cheesecake turned brown in the oven...) Oh well, they still look pretty damn good!

I vaguely remember saying at the end of last week's post that I'd do something simple and non-cakey this week, but as you can see, that did not happen. I've been cruising food blogs for a while now and macaroons keep coming up time and time again. They look good, but I don't like almonds so I know I wouldn't enjoy them, hence I had the idea to make mini meringue sandwiches instead. Half way through the week, however, I had a hankering for some cupcakes, so I made these instead, keeping meringue involved. 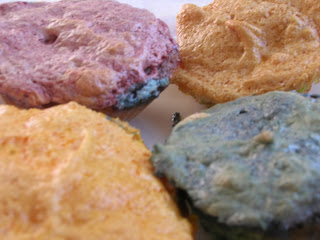 The meringue was a lot more puffed up before the cakes got put in the oven; I think that they must have deflated due to the food colouring. I'm starting to get tired of liquid colouring's attitude and might start to fork out for gel colouring, which I hope won't cause half as many problems. Unfortunately I don't even have a picture of the meringue-topped cakes pre-oven because I was feeling confident that everything would go well and I'd be able to capture their size after the oven.
Everyone liked last week's cheesecake; it wasn't what I had hoped it would be but it was still very tasty and the strawberry flavouring that I had added was subtle enough that the cake didn't taste artificial. I eventually located the second layer of red velvet sponge: on close inspection, the red velvet base had two layers of colour, one slightly browner than the other, which means that the sponge didn't really rise very much at all, despite the two raising agents involved in the recipe. At least the brown colouration seems to have been explained  by the way that pink meringue turned purple in the oven. Ironically, the blue cake was originally meant to be purple but I couldn't get the right combination of colours.
I realise that the 'valentine' cheesecake wasn't incredibly romantic looking, but in my defence it was supposed to have a red base, not a brown one, and it had pink icing. I promise I'll deliver a better offering for you next year, though!
Apart from the lemon and lime curd, which was from Nigella's How To Be A Domestic Goddess, everything else was from my imagination so I'm very pleased that it served me well today! Of course you can always buy the curds if you want to, but the recipe below is for the exact amount of each that you'll need so there won't be any left over lemon or lime curd sat in your cupboard for months. 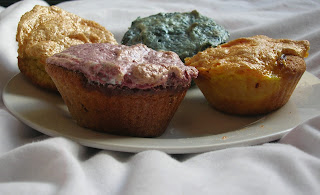 Makes 16
Ingredients
For the lemon and lime curds:


For the cake:
For the meringue:
Recipe 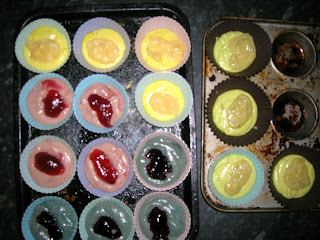 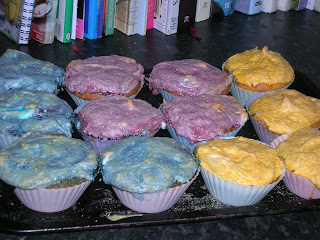 Cakes without food colouring would probably look equally as good, but I was feeling the need for colour today. You might be thinking that putting the cake into the oven for a second time is a risky move, but I found that in the case of the lemon meringue cake this just made the sponge more soft and gave it a melt-in-the-mouth quality that these cupcakes also have. The lemon meringue cake lasted just as long as all my other cakes, too, so cooking cakes for longer than they need seems to do more good than harm.
For help on separating eggs, whisking and any other queries you may have, take a look at The Basics. If you have any queries that I haven't addressed don't hesitate to ask.
I am too obsessed with the imminence of Pancake Day on Tuesday to be thinking about what to make next weekend, especially because not only is it a day filled with pancakes but also we're going to see The Muppets in the evening, so I'm literally bursting at the seams with excitement.
Would you like a pancake post? I'll do one if I manage to make one that is worthy of showing to everyone. If you're looking for something extra special, take a look at Two Peas And Their Pod's dutch baby pancakes, which I intend to make and share with my housemates. They don't seem to be aware of Pancake Day because they made this for Valentine's day, so is this just a British or European phenomenon? Americans, if this is the case, you are missing out! [Edit: due to several posts from my favourite American bloggers on pancake day, I see that they do in fact celebrate this wonderful day. Hooray!]
It therefore looks like next week will be a surprise! It may be a Swiss roll, to use up the jam I bought. But we'll see. Have a tasty pancake day! Maybe have cloud cupcake pancakes??