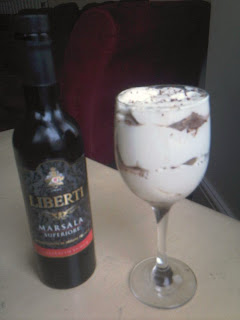 I am a massive fan of tiramisu. If I'm eating at a restaurant and they serve it, chances are I'll be eating it for dessert. There's only one place that I've been disappointed by tiramisu, which is Rocky's in Plymouth (but you should still go there because the other food is great - they serve mussels, my favourite food of all time, so I will always be a happy customer!) I've made this delicious dessert several times before and now I wish to impart the recipe for it onto you so that you might try it yourselves.

The recipe that I've ended up with is a combination of two online ones: one from Good Food and the other from a site called Italiana. I tell you now that my recipe is not really authentic Italian style, but it works for me. Yesterday I forgot to buy coffee in the supermarket and our resident coffee drinker, M, didn't have any so I made today's tiramisu with hot chocolate instead. It doesn't give quite the same taste to the sponge layers but it'll do, and the lack of coffee made it more accessible to other housemates who wouldn't normally have eaten this.

Honestly though, you can't really pinpoint the coffee in a tiramisu because all of the flavours combine, creating a wonderful taste and texture. Tiramisu is best eaten after a couple of days because of this melding of flavour, but when I made this last night I couldn't wait that long so I ate one of the wine glass ones immediately after clearing up.

To return to my original point, you should really use coffee in your tiramisu unless, like me, you can't face going back to Morrisons so use whatever other hot drink you can find around the house. Maybe this would work with a really strong tea, but I'm not a tea fan so I won't be trying it. Also, if you don't have Marsala, Lambrusco works pretty well too but it colours the dessert slightly pink.

Because I thought it would only be me eating it, I made mini tiramisus instead. I only had two wine glasses to hand, though, so I made another few in coffee mugs, which worked just as well, I thought:

The blueberry loaf cake from last week improved as it aged, so after a couple of days it was at its best. I thought it tasted like blueberry muffins, and the hints of cream cheese icing that I hadn't managed to scrape off the bottom of the cake made it taste even better than it did already, so if I make it again I'll definitely use the icing but not use blue colouring this time!
Ingredients
Recipe 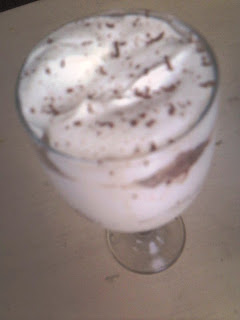 I would like to apologise for my pictures not being quite up to scratch, but I lost my HTC last weekend and unless it turns up I'm making do with my old Samsung G600 until my contract ends next year. I forgot that the HTC's photo quality far out-does the Samsung's, so next time I take photos I'll make sure I use my camera (which is still not great at focusing but at least it doesn't give everything a weird grey tint).

If you need more information on how to do anything mentioned above, visit The Basics. For ideas on how to make this delicious dessert more diet friendly, have a look at Healthy(ish) Baking.

I have no idea what to make next week, but first I have a second post for you about the cake I made at N's request, which I'll post tomorrow. Maybe I'll have more ideas about next week by then.