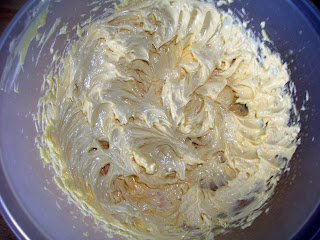 I hadn't actually planned on making a post about this at all, but having just tried it myself I thought it would be a shame not to share the idea.

I doubt that I'm not the only one who often ends up with too many egg yolks, be it from making meringues or Swiss meringue buttercream. The latter is my problem, so with 12 egg yolks left over from the Cinnamon Raspberry Cake (I had to make two buttercream batches due to a mishap) I looked to my bookmarked recipe from Bravetart: Faux French Buttercream.

I'd actually managed to use half of the egg yolks by the time I got round to making the buttercream by putting them in custard and making scrambled egg yolks (don't knock it til you've tried it), so I only made a third of the recipe listed on Bravetart's site. I would use six egg whites in a Swiss meringue buttercream for icing an entired two-layered cake, but this Faux French Buttercream doesn't look like it'll stretch as far so I'll have to make another batch before doing anything with it - more excuses to make scrambled egg whites (another thing not to be knocked until one has tried it), then! I also found that I didn't need to use as much butter as suggested - only about 250g, as opposed to the prescribed 330g.

I couldn't avoid licking the spoon (yup... just fell into my mouth...) and this buttercream tastes a lot sweeter than Swiss meringue buttercream, even before adding any flavouring to it. Despite having a different makeup, Faux French buttercream looks like it will hold its shape well, so it should be good for piping.

I'll probably be using this buttercream in the cake I'm making on Thursday, so keep an eye out for it. I won't post the recipe here as I haven't altered it from the original, so if you want to try the buttercream yourself you should take a look at Bravetart's page.