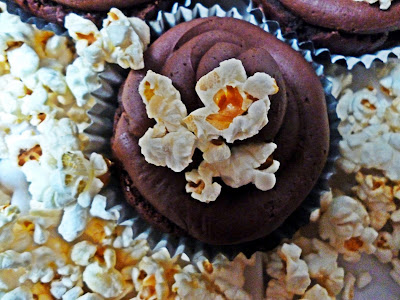 These cupcakes were actually designed with Eurovision in mind. For those of you who are oblivious to this annual event, Eurovision is a pop competition where each country in Europe enters their 'best' pop act, the more zany their attire the better, and at the end of the final every country tallies up their respective (politically biased) results in order to select a winner. England is notoriously unpopular, and famously received zero votes a few years ago. As I say, the votes are very biased, and many countries vote for their neighbours or allies. England apparently has no friends in political Europe, though because the winning country has to host the event the following year, a friend of mine joked that maybe we'll get more votes this year because nobody wants to have to pay for it. 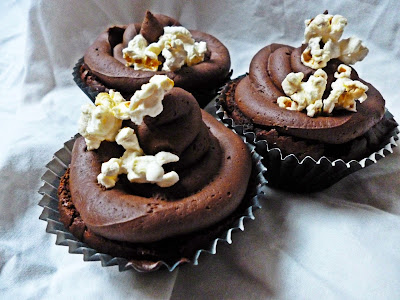 Anyway, the main draw of the event is the vast array of song choices and the outfits that the performers wear. I've not watched Eurovision for a few years because it's no fun watching it alone and mocking to yourself, but this year I'm lucky enough to have found some equally enthusiastic friends to sit and watch the event with. 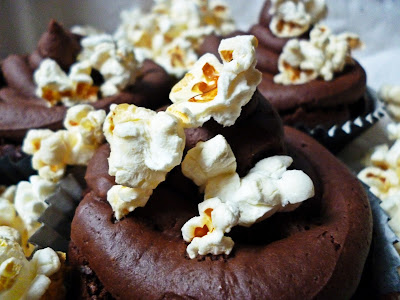 So, onto the cupcakes. These are chocolate cupcakes, filled with salted caramel (recipe adapted from BBC Food) and topped with chocolate buttercream and popcorn. I had entertained the idea of putting popcorn into the cake mixture too, but I didn't think the texture would work very well. I got the idea for incorporating popcorn into baked goods when I saw this recipe for Popcorn Cookies from Pink Patisserie, and then the idea for these diet-ruining monstrosities slowly came at me like a tsunami on my mind. Don't get me wrong -  these taste incredible, but it is hard to stop at one!

Makes 12
Ingredients
For the cakes

For the salted caramel
For the chocolate buttercream
Recipe 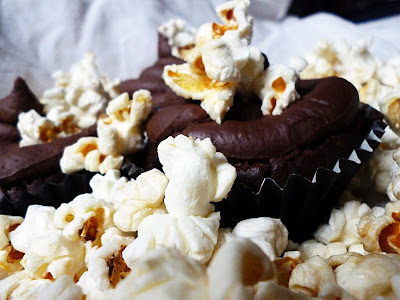 You can reduce the impact of these cupcakes on your waistline, as I did, by using low fat cream, butter and sugar substitutes like Truvia or fruit sugar. Take a look at Healthy(ish) Baking to find out more.