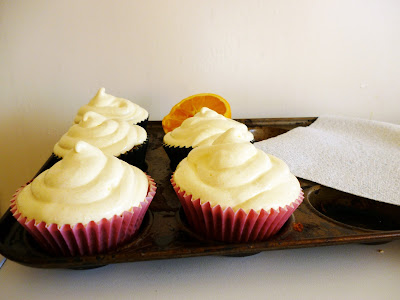 This may not be a traditional flavour combination, but trust me - it works.

There's a coffee shop in Plymouth called Barista Brothers. They stock an odd variety of syrups amongst the more traditional flavours, examples being tiramisu, coconut and orange. I love getting syrups with my lattes, and though peppermint is my favourite I like to try new flavours when I'm in the more independent places.

The last time I visited Barista Brothers I had orange syrup in my coffee. The syrup had an artificial orange flavour similar to the kind you'd find in a chocolate orange or something from a chocolate box. To be honest, when I ordered the coffee I wasn't really expecting the combination to work, but it really did - so much so, in fact, that I decided to emulate the drink by transforming it into a cupcake. 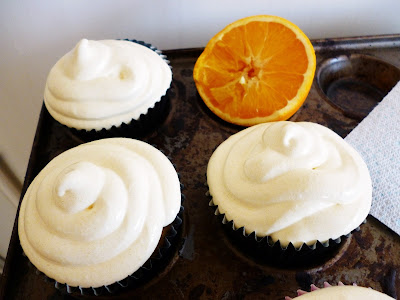 I hit a bit of a road block with the icing here. I had wanted to do a buttercream with icing sugar, but when it came to making it I discovered that I only had 75g left. I stick to a budget and didn't really want to go to the supermarket before the end of the week, so had to root through my excessively long favourites folder called 'Frosting etc' for something else suitable. Eventually I came across the Seven Minute Frosting used by Ellen at Bake It With Booze, which uses egg whites and caster sugar as its key ingredients. I had both of those!

The cupcakes are moist and delicious, and though I couldn't get a strong orange colour (I need to buy more food colouring), the Seven Minute Frosting really tastes good. It certainly tastes of orange, and you'd never guess that it's basically meringue. Give these cupcakes a try today - they're really easy, and don't take long to make. I made the cupcakes and frosting before work one morning after the other and each step took me about 30 mins.

For the seven minute frosting (adapted from Bake It With Booze) 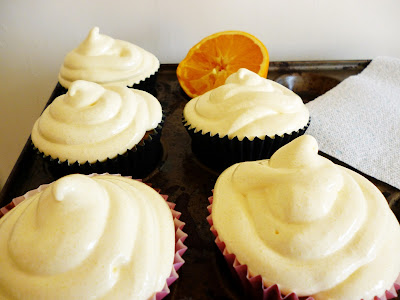 I'm entering these into this month's Calendar Cakes Challenge. It's hosted by Laura Loves Cakes this month, and Laura has chosen cupcakes as the theme in honour of National Cupcake Week, which takes place this week! The challenge was set up by both Laura and Rachel at Dollybakes. 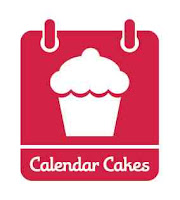 Cakeyboi (this month's host) and The Baking Explorer have set up a new challenge called Treat Petite. This month it's a free for all for small treats, so these cupcakes fit in nicely. It's a great idea for a challenge and I bet it'll pick up a lot of entries. 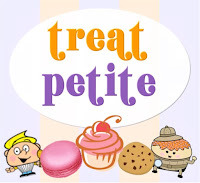