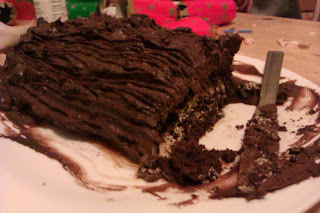 I am so pleased with how this dessert came out - it could have gone so wrong! I just imagined the cake splitting and falling apart when I turned it out and when I rolled it up, but success - everything went perfectly. The only thing that would have made it better would have been having icing sugar to dust the top off for a 'snow' effect, but unfortunately (or maybe fortunately, considering how lumpy it was) it has run out and since it's the end of term and I'm low on money I didn't want to buy any more.

I made this as the dessert for my house Christmas meal, which we had last night and was awesome! I was more full than I can ever remember being afterwards, but it was totally worth it. Unfortunately E couldn't make it, but the rest of us had a great time making and eating it; we even bought crackers (I didn't win once) and earlier in the  evening I got to listen to the Frank Sinatra Christmas record that I brought back with me from Liverpool. Overall, a great evening.

Shockingly, the sponge for the chocolate log is made from nothing but egg, sugar and cocoa. I was surprised that there was no flour or even ground almonds, but the sponge that resulted from the recipe (taken from Delia Smith's prune and Armagnac chocolate log) was wonderfully light and made the cake that much better. I used Swiss buttercream for the filling and made a chocolate ganache for the topping. This cake is amazing, and deserves to be on any Christmas table. Some holly might have been a nice finishing touch, too, but I have yet to see a single holly bush in Newcastle. I did consider going and getting some leaves off the streets, but I don't really want pavement leaves touching my nice cake.

Last week's sweet potato pie  was compared by my housemates to egg custard tart, which I think was due to the nutmeg. Everybody seemed to like it and it did go fairly quickly, but I made donuts for N's 21st on Sunday, which understandably took the limelight from the pie. Nevertheless, I was very pleased with it and it was so easy to make that I'll definitely use it as a fallback recipe.

Everybody has already proclaimed the chocolate log as a winner, so I expect it to disappear pretty sharpish. Try one yourself; you won't be disappointed.

For the filling & topping:
Recipe 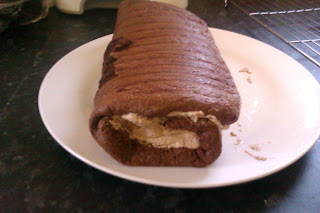 If you don't understand what some or the jargon used above means, go to The Basics, where I have also added some pictures of soft and stiff peaks. 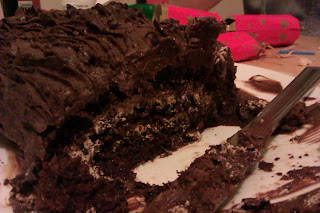 Next weekend I'm going home, so you won't hear from me until a bit later than usual, but then I expect there'll be at least one rave about pasties and cream teas, too.