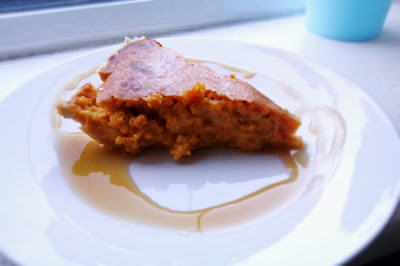 It turns out that the Americans have something right. Here in the UK, we use sweet potatoes only in savoury dishes and look on with some scepticism when our friends across the water use them with things like sugar, marshmallows and cinnamon, but it turns out that it can make a pretty tasty combination. I took the recipe from allrecipes.co.uk and was pleasantly surprised when I bit into this: it's gooey, sweet and spicy (not the hot chilli type of spicy), and I'll definitely be making it again. I served it with maple syrup (left over from last week's apple and maple syrup cupcakes) in the above photo, but I think it would work really well with vanilla ice cream or clotted cream.

Speaking of clotted cream, I'm really craving a cream tea (for people not familiar with these, a cream tea consists of two scones, some clotted cream, jam and a pot of tea) and cannot wait to go back to Devon for Christmas and have one. I always go home for the holidays craving South Western foods that the North East just can't give me to the same quality. Have you seen their idea of a pasty? I've never seen a cream tea even advertised up here. Therefore, the first thing on my long list of things to do when I go home is to grab G and go and get one. Other things on my list include making S and EH's baking suggestions with them (red velvet cheesecake and an unconventional Christmas cake with ruffly icing that I predict I will not be able to do well), so the Christmas period looks to be full of baking.

Last week's cupcakes were really nice; there are still a few left because it was quite a large batch and other sugary goodness (G's birthday present for her 20th) was made mid-week, stealing the limelight somewhat, I think.

This week the tin opener broke and, because we're apparently all too lazy to walk five minutes to Morrisons and pay for a new one, we've all had to blunt our knives and scissors in efforts to open our various tins, like so:
Nobody's been victim to any misplaced knife stabs so far, but give it time...

I only altered the recipe slightly by cooking the sweet potatoes before blending them, leaving out the rum and apparently forgetting about the salt. I don't have a pie dish so had to make do with a casserole dish lid type thing, so I ended up with a bit too much mixture. If you own a real pie dish you shouldn't run into this issue, but if you do then just pour the excess into cupcake cases and cook it alongside the pie. I'm lazy when it comes to pastry, so I bought a frozen pack of ready-rolled shortcrust. These can be found in pretty much any large supermarket, and I've found them in the fridge section in Sainsbury's before. In case you do want to make your own pastry (if you do, I suspect you're the type that whisks by hand, aren't you?), I have diligently searched for and found a link for you. 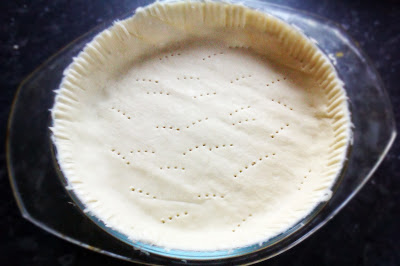 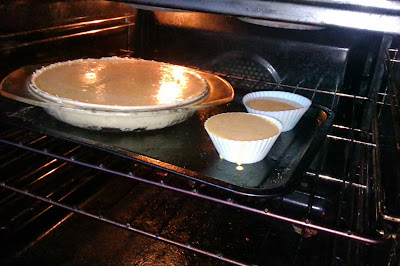 For tips, advice and jargon deciphering, go to The Basics.

Next week in my house we're going to have our Christmas meal, so I'm going to make a chocolate yule log for the occasion. Check back next week to see how it went!