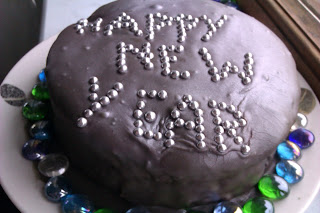 This cake looks remarkably different from what I had planned. The deterioration of my plan first started when I forgot that I wanted part of it to be white and proceeded to add food colouring to the entire batch of icing. Next, the red and blue food colouring refused to make any remote shade of purple (I have decided to blame the syrupy consistency of the 'natural' red food colouring), instead settling on an appetising slate grey. By now, the taste of the food colouring had changed the flavour of the icing from cream cheese to food colouring flavour (not nice), and the icing was no longer stiff enough to pipe with, even after the addition of the rest of the bag of icing sugar (at least 500g). I therefore now have large a tub of grey cream cheese icing and a cake that looks a whole lot less spectacular than I'd had in mind. That'll teach me to be creative! 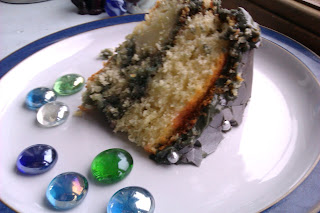 I therefore present to you this New Year celebration cake. It looks like a lump of metal decorated with ball bearings on the outside, but inside is a fluffy sponge that is littered with delicate pieces of pear (and apparently also bits of grey that have seeped through from the icing). Overall, I don't think I did too badly with fixing the cake up and I suppose you could call it an 'opposites attract' type cake (i.e. metallic/manly vs soft/girly) so it is a universal pleaser, except for people who don't like pears or cream cheese.

Once again, my proficiency for making words and numbers on cakes shines through:


The spacing and sizing of the letters is dreadfully non-uniform because I was doing the decoration without guidance from perfectionist housemates, and only when I got to the end of the top of the cake did I realise that I had used more space than I thought I would. I also inexplicably struggled with the letter 'Y' because I couldn't remember which way the tail went - a trial that every 20 year old contends with at one time or another, I'm sure...

On a better note, my mother was very impressed with the white chocolate, orange and ginger flapjacks that I made her for Christmas. I made a gift for each of my three immediate family members, but posted only that one because it fitted in with the We Should Cocoa challenge (see the round-up here) and because hers was the most interesting. I made my Dad a spicy fig and walnut cake that was loosely based around Nigel Slater's Plum Pudding Cake, and I made my sister some millionaire shortbread from Nigella's How To Be A Domestic Goddess (which I highly recommend) that I had promised to make over the summer, but never got round to.

One last thing before we get down to the recipe: last week I mentioned making a Facebook page for the blog and this week that idea was realised, so you can now like Cake Of The Week on Facebook so that you know when I have posted a new recipe or have any exciting cake-related news or whatever. Hooray!

For the (pre-disaster!) icing:
Don't Make My Mistakes!
Recipe 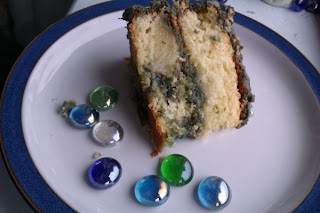 Now, what do I do with a huge excess of grey icing? I think I'll make mouse cupcakes - possibly the only way to make a grey cake look attractive (except possibly by spraying metallic spray on it, as above). I doubt that I'll make a whole post about them because I want to try again at doing some fancy icing, but I'll make sure I'll show you the result of what I come up with.
If you don't know what any of the terms used in the recipe mean, please visit The Basics for lots of information on how to get started in baking. If you'd like to buy the edible spray or silver balls that I used, I got them from Tesco but know that they are also available in the Co-op. The red food colouring that ruined my plans was Dr Oetker Natural Red - just in case you were about to use it to make purple icing. 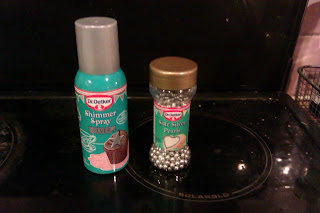 I hope you all had a good Christmas and I wish you a happy new year!