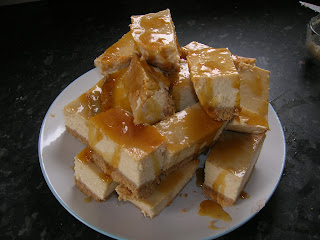 Ta-Dah! I'm pretty impressed with how this cheesecake turned out. Unfortunately I did not invent this recipe myself; the credit all goes to the very talented Nigella Lawson and her book, Kitchen. The only things I really changed were the amount of muscovado sugar (because I didn't have enough, so I replaced it with caster sugar) and the vessel in which it was cooked (casserole dish as opposed to spring form tin) because I wanted to make small slices due to the richness of the ingredients.
I've already had great reviews of this from my housemates and, having tried it myself, can tell you that it does indeed have the 'smoothest cheesecake texture that you'll experience', as claimed by Nigella. The only issue I really have with this cheesecake is that it isn't quite sweet enough, even with the toffee sauce. I don't know whether it's because my bananas weren't ripe enough or whether the recipe is simply lacking the correct amount of sugar. I also found the toffee sauce to be a little too fruity for me due to the golden syrup, so if I were to bake this again I would use the toffee sauce recipe from Nigel Slater's sticky toffee pudding, albeit slightly more indulgent. 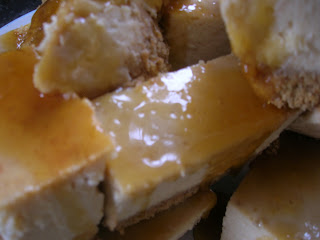 Last week's cloud cupcakes got snapped up very quickly. I really loved the marshmallow-like texture of the meringue on top contrasting with the sponge, and of course the pretty colours!
Tuesday was Pancake Day, so I took the opportunity to show you all how simple pancakes really are and how you can vary them however you like with my banana marsala pancakes (I'm having a bit of a banana moment). I also made Two Peas And Their Pod's Dutch baby pancakes, which literally disappeared in the space of an hour. I would definitely recommend them as they have just the right dose of chocolate and goo whilst still being pancakes.
Anyway, back to today's banoffee cheesecake! If you're not sure which cream cheese you should use, take a look at the post for the New York cheesecake, where I discuss the finer points of baking with cheese. It also really helps with this recipe if you have a food processor, or at least one of those hand-held soup blender things. I added sugar to the recipe below so hopefully the cheesecake will be sweet enough now.
Makes 20
Ingredients
For the cheesecake:
For the toffee sauce:
Recipe 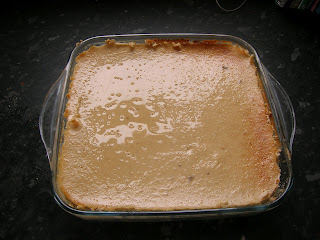 Interestingly, the cheesecake absorbed the toffee sauce after half an hour or so, so you should make sure that you only drizzle the sauce over just before serving.
For tips on how to make this dessert more healthy, take a look at Healthy(ish) Baking.
I had intended to make a Swiss roll as well this weekend, but I currently only have one egg in my possession and a Swiss roll, like the chocolate log, requires 8 eggs. I might go and buy some more either tonight or tomorrow morning, so look out of for a post tomorrow. If not, I might make it next weekend instead.
I might make an oats apple crumble next week, or at least something similar, so look out for that too.