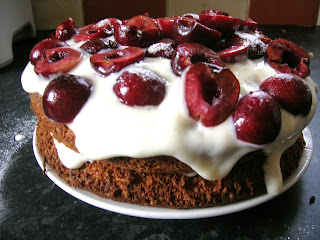 Did you know that cherries are extremely expensive? In Morrisons they are £10 per kilogram! I wouldn't have bought Morrisons' slightly squashed yet pricey cherries, but the street vendor on Northumberland Street in Newcastle did not have cherries on his stand when I went to get some, despite having had them every other time I walked past this week. Isn't that always the way, though?

I'm not sure that the end of February/start of March is the time of year for cherries. Unlike my mother I am not a keen gardener, but even I have a vague perception of times when things are most likely to grow, and I think we can all agree that the in last dregs of winter is not one of them. Either way, cherries cost a lot. At least they make up for it in taste. 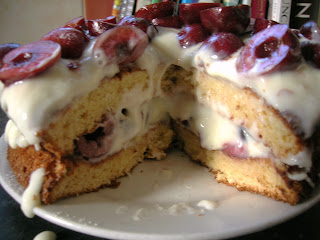 Speaking of the beginning of March, it's finally spring! We made it: the winter is finally over and we didn't freeze to death. In the past ten days or so, the temperature outside has increased from about 3 degrees to a comparatively mild ten degrees centigrade. I've stashed my scarf, gloves and panda hat into the bottom of the wardrobe, my winter coat is on its hanger and I've brought out a thinner coat to keep me warm during the winter-spring transition. I don't know when I last wore it (more than a year ago at the very least) but I found 21p in the pocket when I first put it on again. Score!

I still maintain that the first real day of spring is the day when it's too warm to wear any form of coat, and am waiting for this day with great anticipation!

You may notice that I've given the blog a bit of a makeover. I've been influenced by how good all of my favourite food blogs (see right) look and decided that mine was a bit too dark and busy. What do you think? Any ideas? Or do you think it looked better before? As you might be able to tell, today's cake is a cherry cake. The sponge is relatively fat free because it contains no butter, and the topping is made from creme fraiche. I spent the whole week deliberating between buttercream and whipped cream, but in the end I decided to do something entirely different and I'm glad I did because creme fraiche and icing sugar taste criminally good together. The cake itself is delicious: it is incredibly light, and the cherries do a nice job of keeping the cake from being too sweet as well as adding a nice dose of colour to the table. I've got a load of people coming over tomorrow so I suspect it might have disappeared by tomorrow night.

Last week I mentioned a desire to make a Swiss roll, but at the time I had no eggs. I never posted about it, but I did actually attempt to make one on Sunday. It actually ended up being a jam roly poly because I had trouble with Swiss meringue buttercream again and it wasn't thick enough, causing it to squeeze out of the cake as I rolled it up. Not my intention at all, but it ended up tasting quite good with custard. To try a Swiss roll yourself, use the sponge recipe from the chocolate log post and exchange the cocoa for flour, line the cooked sponge with jam and buttercream (or your desired filling) and roll it up, as explained in the recipe.

I do encourage you make this cake; if you don't want to shell out for fresh cherries, just drain a jar of them. Do supermarkets sell frozen cherries? This needs investigating... 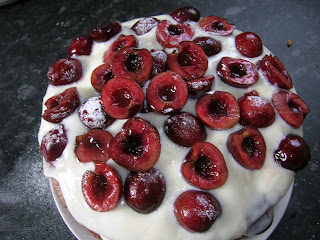 
Recipe
The bottom layer looks good enough to eat on its own, doesn't it? This recipe could be translated into a flan recipe, only I'm not sure if flans are just sponge or if something special is done to them first.
If you need help with separating eggs, look no further than The Basics.
I've decided that baking two things at once only encourages me to eat more junk, so I'm not going make the apple crumble I've been planning until this has been eaten. It won't just be a standard crumble, either, so look out for it!
Have a lovely weekend and I hope the sun shines!