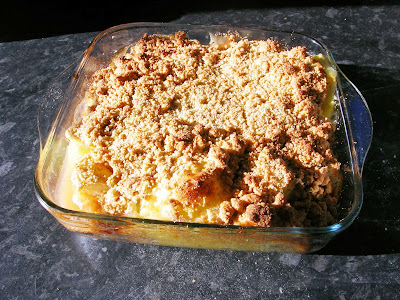 As promised, this is an apple crumble with a twist: I've added cider to the mix. The crumble topping has also had cinnamon stirred through it, giving a nice and soothing dessert (or breakfast...) to help us to get through the winter-spring transition. It's not quite warm enough to go without a coat, but it's not so cold (even here in the North East) that you still can't enjoy a wintry pudding.

I know that summer fruit crumbles do exist, but they never feel right to me unless it's at least slightly cold outside. How else can I justify eating it with custard?

In an attempt to buy the cheapest  cider in Morrisons, I also managed to buy one from home: Gaymers Devon Medium Cider. It's actually very tasty and when I opened it a wonderful smell filled the room, which was maintained as I set it to simmer with the apples.  The bonus of this recipe is that once the apples have softened in the cider you don't need it for the recipe anymore, so instead of draining it in the sink (who would do this?!) you can just drain it straight back into the bottle. 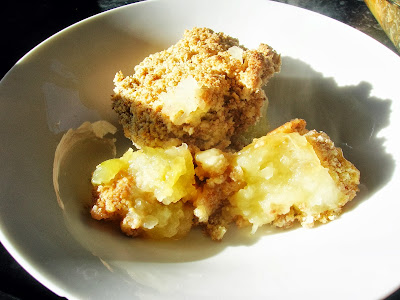 As you might have guessed when I said I used the cheapest cider I could find, you can use whichever cider you want in this recipe. I wonder what Brothers Toffee Apple Cider would taste like?

Having tried the finished crumble I can conclude that the recipe has worked well because you can taste the added flavour from the cider in the apples, but they are still sweet enough; the cinnamon from the crumble complements the apples well. I might actually ditch traditional apple crumbles for my experimental one, it tastes so good. Next time I might try stirring cinnamon into the apples to see which works better.

Apple crumble, to me, is best eaten with custard or vanilla ice cream. There's a good recipe for vanilla custard in Nigella's Kitchen under the recipe for Swedish Summer Cake, but until I recently discovered it I used the powdered variety. I can't  fathom why we did, because for the last five years or so my family has struggled in the simple preparation of custard: for some reason it just refuses to thicken, no matter whether we use a microwave or the hob, but since I discovered Nigella's recipe (which actually takes less time than the powdered custard) I've stopped bothering with it. 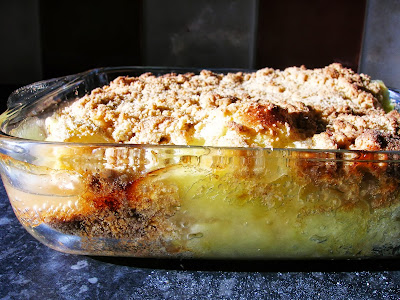 Ingredients
For the filling:


For the topping:
Recipe 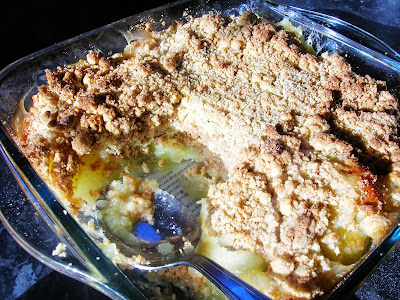 For a more detailed description of how to make the 'breadcrumbs' for the crumble topping, go to The Basics.

Since I baked on the last two days as well as last weekend I haven't given much thought to what I might bake at the weekend, so I suppose you'll have to wait and see. In the mean time, enjoy the revelation that you're more than halfway though the week and bake yourself some cider apple crumble to sooth your mid-week nerves (not that I know much about those - I'm a student.)