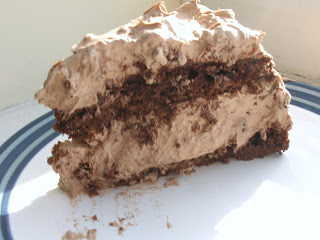 The original recipe for this cake is Delia Smith's Harry's Bar Torta Di Zabaglione from her website. I've had the recipe in my favourites folder for a while now, but this week I fancied making something chocolate themed (possibly because all the shops are gearing up for Easter and are imploring that we buy their chocolate) so I decided to incorporate the two. I also changed the method a little bit, as you'll see if you compare my recipe with Delia's.

So what is zabaglione? According to Wikipedia it is an Italian custard dish made from Marsala that is traditionally served with figs. It is also served in France as sabayon and was popular in 1960s US restaurants. My chocolate version was definitely worth the two-hour wait for the custard to get cold enough before incorporating the cream.

If, like me, you have the tendency to lick the bowl when you've scraped a reasonable amount of mixture out of it, you might get a bit of a shock to the taste buds if you try the custard before adding the cream. It tastes of nothing but Marsala - perhaps because of the 250ml in the recipe - so you might want to rethink tasting it if you're about to drive off somewhere, especially if all your stomach is filled with is dregs of cake mixture and marsala custard. Don't freak out that your cake will be too much for anyone but those with a penchant for hard whisky, though, because the later addition of cream mellows the flavour to one more reminiscent of tiramisu. 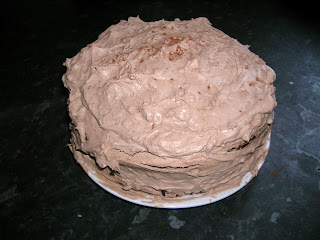 It's been a big week here in our student house because, after up to three months of waiting, things are finally starting to get fixed! I don't know if it's because it's a student house that everything has broken or if we're just unlucky, but since December we have had: a gate that broke in the strong winds of early January; a bedroom door that doesn't close; a toaster that won't work unless a stick is employed to hold the lever down; taps without hot water. Ok, so the last one didn't happen until about three weeks ago, but three weeks is still an atrociously long time to wait to get hot water back!

Anyway, on Tuesday we finally had our hot water fixed; fortunately the shower is electric so we could still clean ourselves but washing dishes had been problematic until E got so fed up that she bought dishwasher tablets. Just as I was calling the letting agent for the zillionth time to ask them to do something about our endless problems, the plumber finally arrived and it only took him half an hour to fix the problem. I complemented him on his continuous and impressive whistling, to which he replied that he has learnt to make a lot of noise when wandering around student houses because you never know when someone is wandering round in the nude!

Today someone from the letting agency came over with a toaster. This was good news, but surprising news because we had bought the (now broken) toaster ourselves and, as far as I know, nobody has told them that we have a problem with it. We weren't going to question the sparkly new toaster, though. The man from the letting agency also told us that someone would be round at the start of next week to fix everything else so hooray! Our house will be broken no longer! 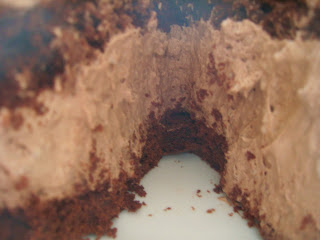 The crumble from the other day has served as a nice breakfast treat, as well as a tasty pudding. It is basically an all-rounder, good for any time of day. There is no excuse not to make it! I had success with the reinvention of the Cherry Cake into leftover cookies and they were quite happily eaten. I actually sent some to my Gran for her 90th birthday - I hope she likes them!

Another thing that I changed about the cake recipe, without realising it, was the quantity of cream. As a result I had far too much zabaglione to simply spread between the two cakes and covered the whole cake in it. That's why the cake looks a little bit different to the one in Delia's recipe. It tastes just as good as hers looks, though! In the recipe below I prescribed the amount of cream that the original recipe asks for, but if you prefer my accident then double the quantity of cream (I just used two packs of Elmlea Double Light, 660mL.) 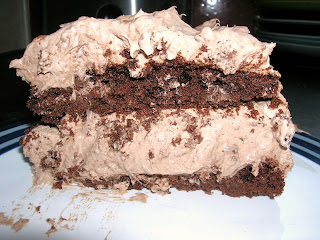 Ingredients
For the Zabaglione:

For the Sponge:
Recipe:

For tips on whisking cream, amongst other things, have a look at The Basics. For ideas on how to limit the damage this cake will do to your diet, go to Healthy(ish) Baking.

Next week is St. Patrick's day. I don't know much about him, but I know that a lot of students use it as an excuse to drink all day so I'm going to make some green and alcohol themed cupcakes which will also incorporate nicely into this month's We Should Cocoa challenge.

I may also bake something with the yellow plums I impulsively picked up last week whilst in the supermarket, but we shall play that by ear.

Have a nice weekend!