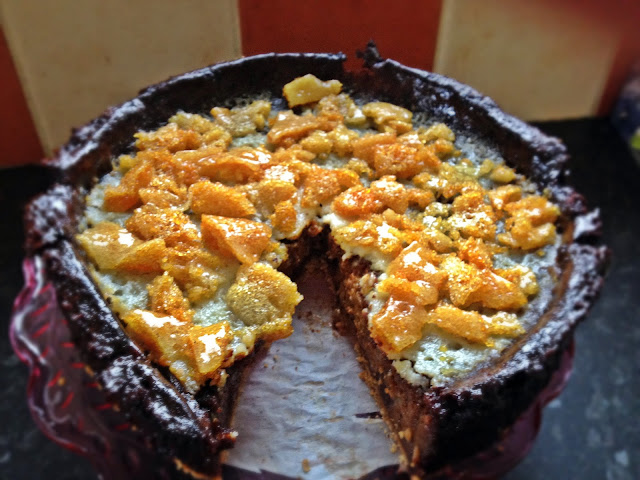 For those of you who don't know, Thunder and Lightning is a name given to ice cream with bits of honeycomb in it. This is one of my all-time favourite flavours. I'm not a massive fan of honeycomb itself because it's a bit chewy and gets very stuck in your teeth, but when it's added to ice cream it becomes soft and its flavour comes out into the mixture, basically making a mouthful of heaven for me.

Having never made honeycomb before, I was surprised how easy it really is. All you have to do is melt some sugar into golden syrup before whisking bicarbonate of soda into it, et voilà, there you have your honeycomb. I followed another Nigella recipe for this - I found other options, but when Nigella is involved I find there's rarely a choice. 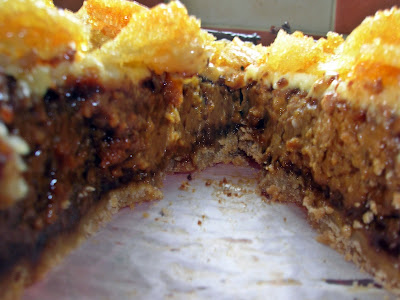 When I tried the remaining scraps of cheesecake mixture that were lining the bowl (I'm not ashamed of my spoon licking habits!) I was blown away by the taste because it exactly matched the ice cream. Full of excitement, I eagerly awaited the end of the cheesecake's cooking time, only to see a congealed brown mess on top. I went to peel it off but realised that the cheesecake had turned a deep golden brown from the honeycomb melting into it, and the congealed brown mess was just a darker shade of this. Feeling better about the whole thing, I went ahead and made the vanilla topping, but I don't think I saved enough sour cream to use in it because it didn't do a good job of hiding the brown surface beneath it. This did not perturb me: I made half a batch of extra honeycomb and used it to decorate the top, giving the cake quite a professional look, if I do say so myself! 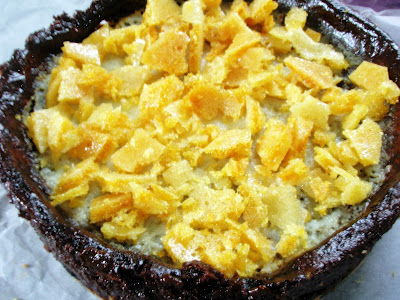 Topping problems aside, the cheesecake still tastes pretty damn good. The honeycomb actually melted completely into the cheesecake to give it the golden colour that you see above. I would have liked a few chunks of solid honeycomb in the mix, but I don't think this is possible without some complicated ingredients that I don't have access to and may not actually exist. I've been reading too many textbooks lately, apparently, and am convinced that just about anything can be made if you protect it from other things in just the right way. My organic lecturers should be proud, if not worried. [Edit: It hit me the other day that it would be easy to solve the melting problem by making a fridge cheesecake rather than a baked one. I don't even have to apply my chemical knowledge for that!]

In deciding what to include in the recipe it was a toss-up between sour cream and double cream so I decided to let them fight it out with their nutritional contents once I found them in the supermarket. To my great annoyance, Morrisons were out of stock of both the Elmlea Double Light that I like to buy and the reduced fat sour cream, so I was left with no choice but to use the high fat options. Sour cream naturally won the nutritional contents battle with double cream (also it was cheaper), so that's what I ended up using. 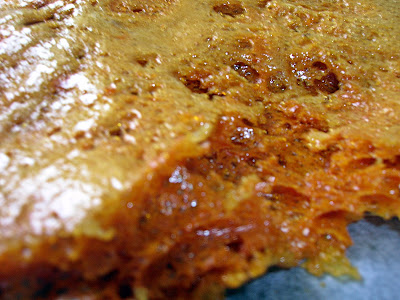 It might still be too cold for ice cream and strolls along the beach, but until then you can prepare your tastebuds for the flavours of the months ahead by making this glorious cheesecake.

Ingredients
For the honeycomb:

For the base:
For the cheesecake:
Recipe 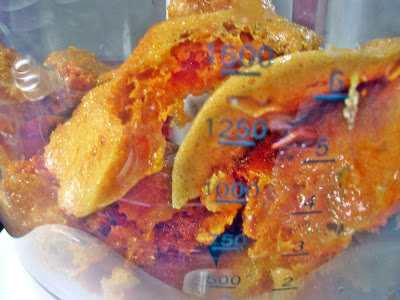 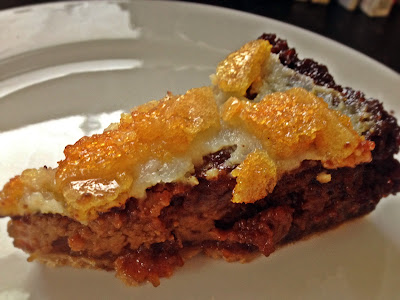 For tips on making this cheesecake a bit better for you, take a look at Healthy(ish) Baking.

For those of you keeping tabs on the shortbread biscuits that I am forever promising to make, I finally made them this week but am going to save the post for when I go to Liverpool in a couple of weeks. They taste good and are worth the wait, I promise!

Next week, I'm thinking about tackling Swiss meringue buttercream again and getting back on the piping horse. With luck I'll have a decadent looking cake to present to you this time next week - wish me luck!