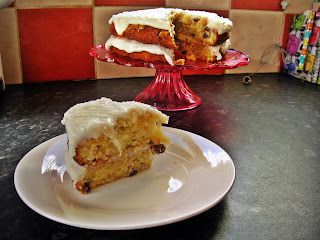 I have always loved carrot cake. At first, around the time when I was a fat 11 year old, I only liked it because of the cream cheese icing. As my taste matured, I also paid more attention to the cake itself and soon it became one of my favourite types of cake. In my first year at university there was a small deli which sold a triple-layer carrot cake. I'm pretty sure I had it almost every week until they changed the recipe and became stingy on the icing, losing my interest in the process. They went out of business a few months later - clearly because they were no longer getting my business.

This is the first carrot cake that I have made without following a recipe (another no-recipe breakthrough). It tastes pretty good, but I think there is room for improvement. The icing lacks the bite that I am so fond of, so I think I need to find a better cream cheese, or many even a better cream cheese icing recipe to the one that I base on buttercream. I think the cake should have been a little more dense and moist - it would have been perfectly fine had it been a different type of cake, but for me a carrot cake needs a little more density than others. Something to work on, then. 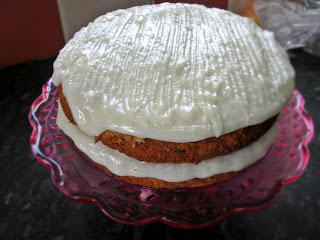 It's been abnormally wet here in the past fortnight. I've discovered that my hair doesn't go crazy like it used to when it gets wet, so on seeing that it was drizzling a bit when I was about to leave for a lecture I decided to brave it without an umbrella, assuming that it would stop before I got too wet. How wrong I was!

From about half way through my journey I knew that I had made a terrible mistake, and by the time I got to the lecture I looked like a drowned rat. The toilets didn't have a hand dryer so I had to make do with a hand towel in order to try and make myself look half decent, but I needn't have bothered because an hour later, post-lecture, the rain was hammering down even more ferociously. When I finally got home I slunk in, hoping that nobody would catch me in my almost-drowned state, wrung out my hair and coat and jumped in the shower as soon as possible. I was pretty much soaked to the skin. I now have an irrational fear of getting caught in the rain and soaked again - I doubt I'll be leaving my umbrella at home any time soon.

To those of you Brits who are shaking your heads, thinking "never leave the house without an umbrella!", I would agree with you if I weren't living in the North East, but it seldom rains here -my Geordie friends would disagree, but they have never lived in other, much wetter, regions of the UK. When it does rain it is either (inexplicably) at night or it rains for days on end - the odd shower is pretty rare. It's often so windy here that any attempted use of an umbrella is futile anyway. 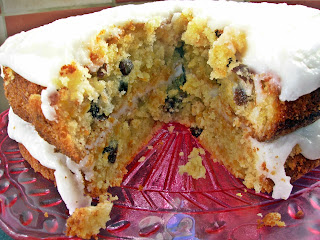 Anyway, back to the cake: I think it's worth a try, despite not being perfect. If you aren't a fan of raisins then just leave them out, or exchange them for the rind of one orange. 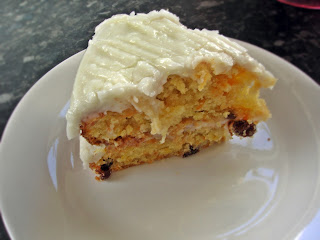 Next weekend I'll be in Liverpool visiting my grandparents, who don't have the internet. I've saved a post on  Chocolate Chip Shortbread cookies to keep you going while I'm there. I'm really craving chocolate fudge cake so I may make one soonish.

Have a good weekend and remember to take your umbrella with you!