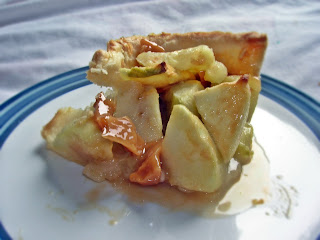 Once upon a time, The East Gate Café in Tavistock, Devon served a wonderful dish called a Caramel Apple Slice. Unfortunately the café changed hands and stopped making it several years ago, and ever since I've been on a never ending search for a decent replica - you may remember when I mentioned my last attempt at making it way back in November. It did not go well.

There are no recipes for it on the internet, so I'll just keep on experimenting until I get it right. The only almost perfect example that I've found is in Morrisons' bakery, so I'm tempted to just ask them how they prepare the topping. It's meant to be a thick, fudgy layer but I just can't get it right.

Anyway, this is official attempt number two, and you might have guessed that it was a failure. Not a complete one, though, because it still tastes pretty good. There wasn't nearly enough fudge to cover the top for starters, but even if there had been it wouldn't have worked because the fudge solidifed a little too much on cooling. 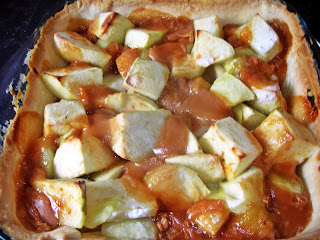 I think this would make a good afternoon snack to go with a coffee and a catch up with a friend. It's quite easy to put together, too, so you could make it in a hurry or whilst preoccupied with other things. I buy ready-made pastry, but if you want to make your own then obviously go right ahead. 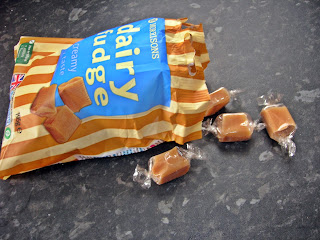 I made this on Friday with the Smarties Cookies and my Chocolate & Banana Loaf Cake. The loaf cake goes down so easily that Im ashamed to say that I've devoured pretty much all of it myself. The Smarties Cookies were eaten almost in one sitting by my male housemates while watching the football on Saturday - at least I know they were tasty!

Keep your eyes peeled for the Banana Peanut Butter Muffins that I'll be making imminently!