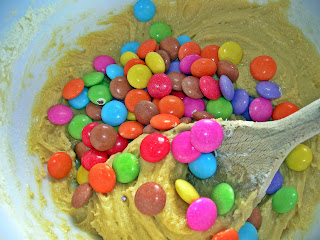 Today has been a bit of a baking frenzy. Since Sunday, when the Wimbledon Cake was finished off by ravenous housemates, I've been lacking in pudding foods. I've got a massive sweet tooth (can you tell?) so this was quite distressing. I couldn't do much about it because, after a failed attempt at Tamarillo Muffins (far too bitter, even with copious amounts of sugar - next time I'll need to stew them first), I lacked vital baking ingredients. I just about had money left for peanut butter, so I did manage to scrape together some Peanut Butter Banana Muffins, but these were too dry and were more sponge-like than muffin-like (an improved recipe is on its way this coming week, hopefully!) 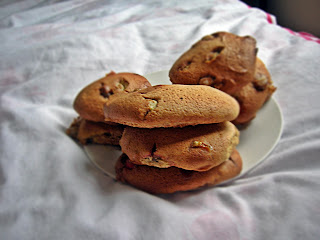 It's not like I was starving and had nothing sugary to eat, then, but what I had wasn't up to my usual standard and the muffins were eaten reluctantly. I know some of you might be wondering why I didn't just go without dessert, but I'm afraid that's not a realistic idea for me. I need my sugar.

This brings me back to today's bakeathon. If you want an idea of how much baking I did, just look at this picture of my kitchen:

And before you ask - yes, I do have exams, but first I need to bake some cakes so that I don't get the urge to bake the day before one of them. Or during one of them. It just wouldn't do if I was sat in my organic exam, trying to remember how the Mitsonubo reaction works, for example, when suddenly I got an uncontrollable urge to bake a cake. It wouldn't do at all.

Anyway, today I made some Smarties cookies. The colour hasn't stayed on the smarties as well as they do in the supermarket versions, but they still taste the same. I had major chocolate cravings this week, so hopefully these will help to stave them off for a while. 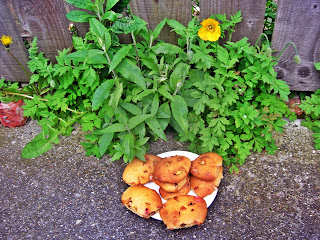 For ideas on how to make these cookies a little healthier for you, take a look at Healthy(ish) Baking.

If you're wondering why the cookies in the above photo are outside under a poppy plant, it's World Baking Day on Sunday so I was joining in the fun!

I'll be seeing you soon to tell you about the Apple Fudge Tart. I hope the sun shines on you!