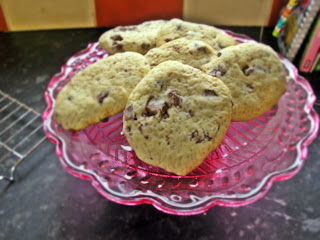 I love shortbread. The restaurant that I work in during the holidays is always selling shortbread biscuits, amongst other things, and after staring at any tasty looking food for long enough - especially when I'm not allowed to eat it - I get the urge to either buy or bake it myself. This explains why I started going on about making these biscuits back in March, just as I was about to start working there again.

I actually made these a couple of weeks ago but saved them for today. For one, this was because I didn't want another post taking their glory (I baked them right before the Thunder and Lightning Cheesecake) and this was also because I knew I'd be away in Liverpool this weekend so this would be the perfect thing to keep you all going while I'm absent!

These biscuits have just the right texture for shortbread. I actually chopped some glacé cherries into half of the batch - they make cherry shortbread sometimes at the restaurant, so naturally upon seeing the neglected glacé cherries in my cupboard I knew just what to do with them. The recipe that I used for guidance (I may have conquered cookies, but I have not conquered shortbread as of yet) was Button Shortbread Biscuits from Australian Women's Weekly's The Complete Book of Cupcakes, Cheesecakes and Cookies (I have searched high and low for a link to this book on a retail site but none seem to stock it, however last time I checked it was still being sold in WHSmith). By my judgement, the recipe called for too little sugar so I added an extra 50g, though apparently this was not enough because the biscuits still aren't quite sweet enough (hopefully this has been fixed in the recipe below). The lack of sugar has fortunately been saved by the chocolate and cherries, and the biscuits are still incredibly tasty.
Ingredients

Recipes
You can vary this recipe however you like. You could exchange the cherries for hazelnuts or macadamia nuts (or just include them along with the cherries), swap the chocolate and cherries for pistachios, use different types of chocolate or dried fruit. The recipe is your oyster!


This weekend I'm going to do some baking for my grandparents. They normally like traditional cakes, but I wanted to make them a Chocolate and Banana Loaf Cake and a Lemon Meringue Cake (though I'm rethinking this because they don't have an electric whisk...) On the phone today my Grandad said he wasn't a fan of bananas, so I might change my plans completely. I'll let you know what I make, anyway.


When I get home I'm going to make a chocolate fudge cake - I've been craving some since I had a slice in Pizza Express the other week with a friend.