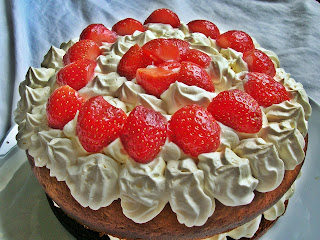 I'll be honest here and tell you that I'm not in the least bit interested in tennis. I've been forced to watch matches in the past but not even pub food will get me into it. The games just go on and on and on... at least with football you know it'll all be over in 90 minutes.

A quick google tells me that Wimbledon doesn't actually start until 25th of June, but I wanted to make this cake before everyone moves out at the beginning of June because I know that it was a favourite when I made it last summer. In fact, everyone is leaving before my last exam so I can't even bake anything extravagant in celebration unless I want to eat it all by myself. Maybe I'll make a single portion and eat it while singing the 'Me Party' number from the Muppets. Or, you know, celebrate with my non-live-in friends. 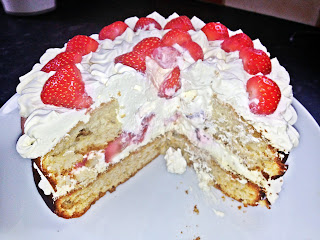 Anyway, this cake is pretty simple. Unfortunately some of my strawberries had spoiled by the time I got round to using them so I could only use about half as many as intended. The idea is to cut a hole in the top cake so that the strawberries and cream can be layered up from below and spill over onto the top. I don't think I did too bad a job with the cake in the end, but it would have looked a bit more spectacular if there were more strawberries on top.

The sponge was a bit of an experiment because on my way round the supermarket, I came across Tate & Lyle's Fruit Sugar. The price is actually what drew me to it, but when I looked closely at the packaging I saw that it only needs to be used in 1/3 of the quantity that one would normally use for sugar, which is obviously big news for people like me who love baking but also love not being overweight. I gave it a try and can report that the fruit sugar does in fact do what it says on the label. I was being super healthy when I made this and used mayonnaise instead of fat (as with the Healthy Brownies and Chocolate Fudge Cake), but despite all the health the cake still tasted very good. 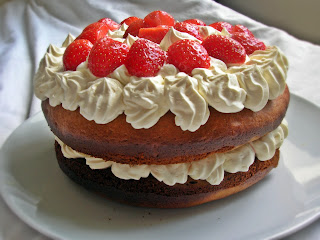 Obviously I don't judge anyone who likes baking with full fat ingredients, in fact I admire your willingness to enjoy cake as it is meant to be eaten. Just swap the mayonnaise for regular butter.

For more tips on baking healthily, go to Healthy(ish) Baking. If you need hints on some of the baking jargon used above, take a look at The Basics.

I can't say when or what I'll be posting next because I'm bogged down with revision, but I'm sure it won't be too long before I make something that I'll want to share with you! Good luck to those of you who also have exams at the moment.