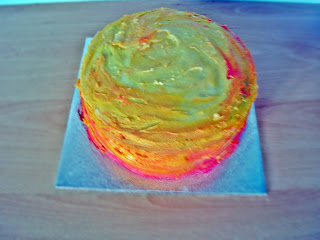 This cake is for S, who is turning 21 on Tuesday. I brought this along to the birthday pre-drinks at her house. For those of you who don't know what pre-drinks are (i.e. people with better drinking habits than my generation), they're an activity employed to get oneself drunk (or at least on the way to drunk) before going on a night out in order to save money. In Newcastle you can get a treble for £2, but entry to clubs is from £5 so it really does save money to drink beforehand. In Plymouth, trebles aren't even a thing so every drink is an expensive one and pre-drinks are deemed a necessity for impoverished students like us.

Served straight-up, vodka has a horrific flavour so I was careful to balance it out with the lemon in the cake, and I used traditional buttercream for the icing so that it was sweet enough to counteract the alcohol. The cake (or at least, the batter) therefore tastes like the perfect vodka lemonade - not too strong but so that one can still taste the prescence of the spirit. I added more baking powder than normal to give a bit of a fizzy flavour to the sponge. 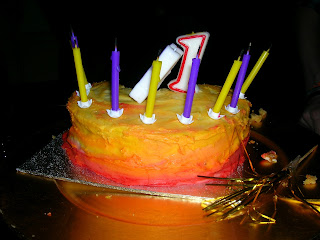 The design for the icing is a style called ombre (french for 'shade') and has been doing the rounds on food blogs of late. Last week Rosie at Sweetapolita put up a video tutorial, making the design more accessible to the less talented cake decorators among us. Fleur at Home Made By Fleur also had a go at the cake and did a terrific job! My cake wasn't very tall so my approach was more slap dash and the white layer of icing on top soon became slightly yellow-tinged, but I got the effect I wanted: a dreamy sunset. Perhaps the alcoholic cake of choice for this design would be a Tequila Sunrise, but I know for a fact that S drinks vodka lemonade and am not sure how she feels about tequila - I know a few people who can't stand tequila as the result of an over-enthusiastic night on the town, so, oddly, vodka was the safer bet here! 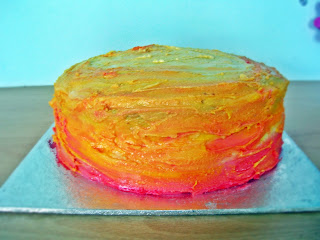 I used light muscovado sugar mainly because we were running out of caster sugar, so don't feel the need to go out of your way to get some specifically for this cake. Light muscovado sugar tends to lend a slightly butterscotch-like flavour, whilst caster sugar just adds a sweetness, so the choice is down to you if you have the luxury of having plentiful supplies of both types of sugar in your house.

For the buttercream:
Recipe 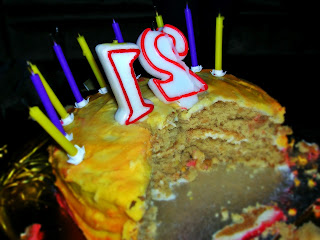 I had wanted to make and show you some Peppermint Latte cupcakes, but they didn't come out as well as I'd hoped so I might try them again before I put them up on the blog. Don't worry, there'll be plenty more cake on here soon enough.

S, if you're reading this, I still remember the TV dinner cupcakes you showed me and I will make them for you at some point! Maybe next year!