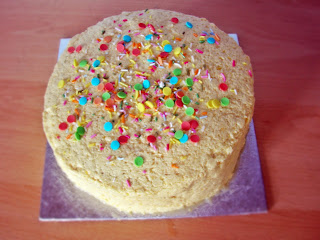 Even the name of this cake sounds fun. I know it's not the name we have for multi-coloured sprinkles here in the UK, but 'Hundreds and Thousands Cake' doesn't quite have the same ring to it. I've seen cakes like this made by one of my baking gurus, Rosie at Sweetapolita, and had to try making one myself. From what I can gather, it used to be a cake mix sold in the US, but I've never been one for cake mixes and it is so easy to make one of these yourself that bothering with the fuss of a cake mix seems like the bigger hassle to me.

Who better to give this colourful cake to than bubbly, bright and always cheerful K, who turned 21 a few weeks ago. We've been friends since secondary school, bonding over GCSE French classes and later A Level Chemistry together, so I always try to bake her something nice when a present occasion comes around - you may remember the Giant Cupcake I baked her at Christmas. 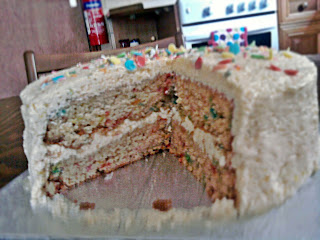 It actually took two attempts to get a multicoloured sponge because the sprinkles originally lost their colour on baking. I was suspicious that their colour might have been lost when every crumb from the cake was white, so I made a discrete hole in the top of it and peeked in, revealing a lot of pale yellow specks and not a lot else. Having made this discovery at around 9pm I didn't want to wait until the morning to try again so I made a late night dash to Tesco and bought some Dr Oetker sprinkles. These proved much more successful and retained their colour on heating - this pleases me because I had almost given up on Dr Oetker after the incident with their red food colouring over Christmas. Therefore, if you wish to make a Funfetti cake yourself you'll want to avoid Morrisons' sprinkles and go for the Dr Oetker ones if you can. 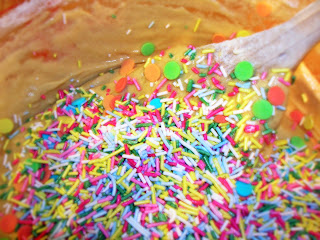 I wanted to make the outside of the cake quite sleek, so I thought that Swiss meringue buttercream would be perfect. I thought a colourful sponge needed a zingy flavoured white icing to go with it, so I gave the buttercream a lemon flavour. It didn't take up the flavour from the lemon juice I added to the egg whites in the early stages of the buttercream making process (remember my flavouring breakthrough), so I whisked some lemon curd into it before spreading it onto the cake. The lemon curd caused the buttercream to curdle a bit, but the addition of a bit more butter and some fervent whisking seemed to solve that issue. Again, I think this is something to do with the fat repelling the water in the curd so it would have been better to add the curd before the butter (I adjusted the recipe below accordingly). 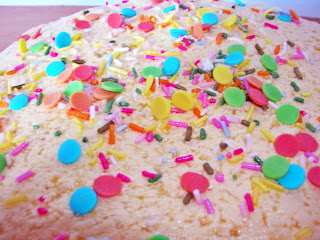 
For the Swiss meringue buttercream:
For the lemon curd:
Recipe 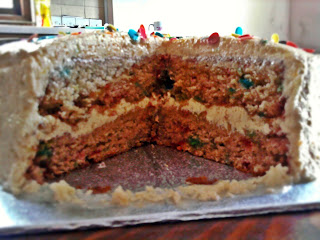 The next sprinkles-related thing I'll be trying is making some of my own via the recipe from Amanda (another baking guru) at i am baker.

I now have a spare cake (the original funfetti attempt - see above), so I might use it as an excuse to try out some new types of icing that I've got stored away in my favourites folder. I'll also be posting the third cake I made this week, a Vodka Lemonade Cake, in a couple of days, so look out for that. Happy weekend!