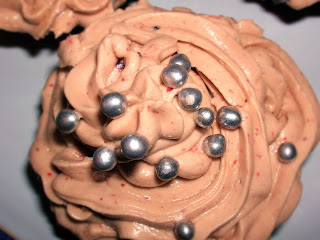 When I first heard about the new We Should Cocoa challenge for July, chocolate and blackcurrants, I was excited that I'd be able to use fresh blackcurrants from the garden. Unfortunately, though, due to the incredibly un-summery weather we've been having the blackcurrant plant in the garden has produced very few berries. Even more unfortunately, my sister had already laid claim to them as she also likes to cook.

I did consider going to Luke's Fruit Farm, where you can pick your own fruit, but in the end I reasoned with myself that with all the bad weather and not being one for getting muddy, actually going there was an unlikely scenario; in the end I just bought some blackcurrant jam.

Choclette at Chocolate Log Blog recently reviewed a natural sweetener called Truvia. I was really excited by the idea of a zero calorie sweetener, so when the people at Truvia saw my comment about it they decided to contact me and ask me to sample it for my blog! You would not believe how excited I was. Only a few days later I received a (full-size, might I add) sample of the product and could not wait to try it.

Truvia is the natural sugar component of the leaves of a plant called stevia. As mentioned above, it is calorie free (making it better than the Tate and Lyle Fruit Sugar that I recently discovered) and it's actually sweeter than normal sugar so you only need to use 1/3 the amount you would normally use.

When you open the tub, a heady toffee aroma washes over you. When cooking with it you're supposed to lower the oven temperature and extend the cooking time by 10-15 minutes because Truvia doesn't have the same structural properties as sugar. I used it in the cake and used a mixture of Truvia and caster sugar in the icing. I couldn't tell that a sweetener had been used and the cakes and icing both tasted fantastic, as if normal sugar had been used throughout. I'll definitely be using Truvia again - I've actually tried it a couple of times in other bakes since getting the sample and it worked so well that I've almost used up the entire pack already! 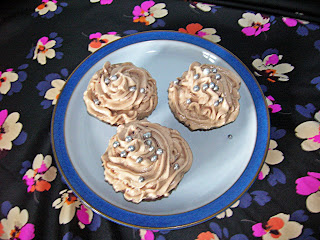 I've just realised that the cake part is invisible in every single photo I've taken of these cupcakes, so you'll have to take my word for it that I didn't just pipe icing onto a plate and pretend there's cake underneath. I used Bravetart's Faux French Buttercream for a couple of reasons: 1) because I'd already made half a batch when testing it out on Monday; 2) because it's sweeter than Swiss meringue buttercream, which I think a cupcake needs - nobody wants a mouthful of buttery air. It really is a delicious icing, especially when the blackcurrant jam is added.

One thing I would advise is to make sure that the jam is either seedless or that you strain it before whisking it into the icing. I did intend to do this, but by the time I remembered my intentions I'd already started whisking the jam in, meaning that piping the icing took twice as long because I had to keep pulling blackcurrants out of the piping nozzle to stop them blocking it.

The cakes themselves are incredibly moist, but a little too dense for my liking. There's something about the oven here that makes it harder to make a cake rise, but think I need to work on making my cakes rise more anyway after seeing much airier ones on blogs like Lavender and Lovage and Working London Mummy. 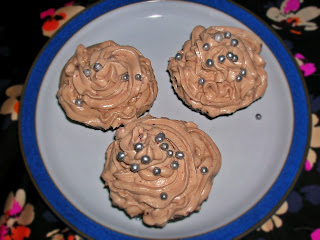 I had originally meant to use sour cream in the cupcakes but my sister somehow managed to use one and a half tubs of it yesterday so I had to use some leftover Elmlea Double Light instead. Like I say, the cupcakes are really moist so this had no detriment to the baking, so I'll leave it in the recipe below.

Ingredients
For the cakes: 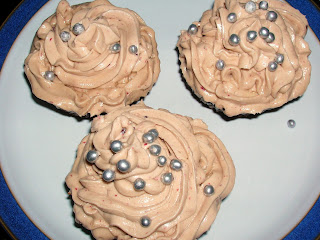 If you'd like to find out more about Truvia, take a look at the website. You can buy it in all the major supermarkets, though I will say that £4.99 for a 270g pot does seem a little steep for a humble student like me. Asda has it on offer at the moment, though, so go and get it before it sells out!

As mentioned above, I'm entering these cupcakes into this month's We Should Cocoa Challenge. The monthly challenge requires that you make something involving chocolate and a specified ingredient; this month the ingredient is blackcurrant. The challenge was set up by Choclette of Chocolate Log Blog (this month's host) and Chele of Chocolate Teapot, who is currently on a blog hiatus so Choclette has been getting guest hosts in to alternate the monthly challenges with her.

If you want to know more about how to bake with a balanced/healthy diet in mind, take a look at healthy(ish) baking. See you soon!

[Disclaimer: the views in this blog are my own and not those of Truvia or any other party.]