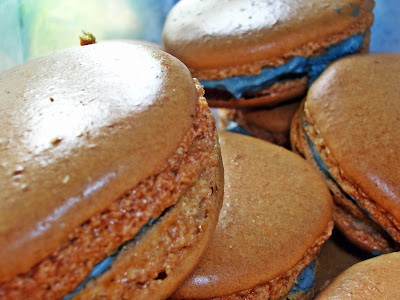 Would you believe that I'd never tried a macaron until I made one myself? I think the main reasoning behind this was that I've never really been presented with one, though I never searched one out, either, because I don't like almonds and the main ingredient in a macaron is ground almonds.

Though I shied away from the macaron, I have long been reading the tales of Adam's exploration of the Macaron and other French delights over at Paris Patisseries - I find it hilarious (and genius) that he diets while in America so he can go to Paris for six months at a time and binge on pastries and chocolates! Through my reading of his reviews of the top macaron makers in Paris I realised that perhaps macarons wouldn't taste of almonds if they were flavoured adequately. The range of flavour and colour combinations seems exponential, so this led me to thinking that perhaps I would like the macaron after all.

Not only have the finest Pâtissiers in Paris made them, but many of my favourite bloggers have been knee deep in macaronage too. The trend appears to have swept the food blogging world, my favourite contributions being the Lemon-Blueberry Macaron Delight Cake by Sweetapolita and the Kir Macarons (with an amazing swirl of colour) by Sharky Oven Gloves.

It was after seeing the Kir Macarons that I finally decided that it was time to take the plunge and make some macs myself. I've heard all sorts of tales about the trials and tribulations of making good macarons, so I thought it would be a good idea to read as many tips and recipes as possible before embarking on my own Macaron Mission. In the end, after reading her Ten Commandments of Macarons, I decided to use Bravetart's basic macaron recipe because she's a pastry chef at a top restaurant and makes macarons three times a day, six times a week! If she can't get them right, nobody can.

On the day I was planning to make macarons, my parents bought blueberries so I knew I had to use them in my recipe! I already had a batch of Swiss meringue buttercream in the freezer because I made so much custard to eat with my Apple & Wensleydale Loaf Cake that I had more than enough egg white for it and decided to use them up before they went off. Swiss meringue buttercream is one of the many fillings one can use for macarons, and since I already had some I wasn't going to let it go to waste! 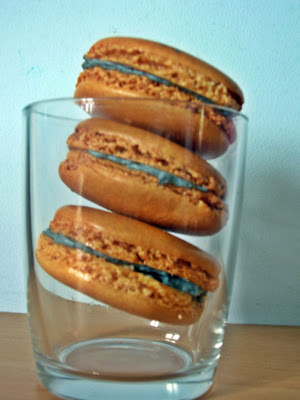 I had to alter Bravetart's recipe slightly because I've never seen kosher salt in the UK, let alone in out house, but I do know that is has different properties to standard sea salt. I did originally try to use normal salt but the meringue wouldn't move past the soft peaks stage, even after excessive whisking, so I had to discard that batch and try again without the salt. The result was much better and I got a very stiff meringue, as prescribed. I also found that I had to cook the macarons for much longer than stated in the recipe.

Makes 25
Ingredients
For the macarons:


For the Swiss meringue buttercream:
Recipe 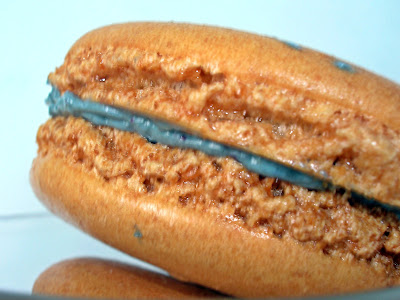 The verdict? I really like macarons. I can't taste even a hint of almond, just chewy vanilla and blueberry. I think I might add a little more vanilla next time as it doesn't come through as well as it could, but still, I am very pleased with these. Only three of 50 cracked and the macarons were satisfyingly macaron-like: they have 'feet' (the bubbly bit at the bottom) and have a smooth top. They even have a gooey texture, which I've been led to believe is a good thing!

For tips on how to whisk egg whites, amongst many other things, head over to The Basics.

I'm co-hosting afternoon tea with a friend on Saturday so will no doubt write a post about that afterwards. Amongst other things, I'll be serving these lovely macarons to everyone! See you then, and may there be many more posts about macarons!

Update: I'm entering these into the May 2013 Classic French Challenge. The challenge is usually run by Jen at Blue Kitchen Bakes, but this month it is being guest hosted by Victoria at A Kick At The Pantry Door.