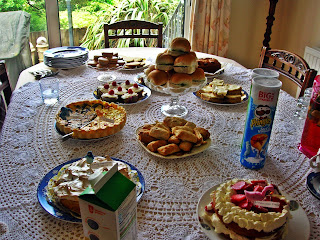 I have long been wanting to throw a dinner party or afternoon tea of sorts in order to feed all my baked goods to my friends. The only problem is that very few of them are willing to drive out to my house in the middle of nowhere, so I've been a little stumped as to how I can possibly throw one where I am not the only attendee. 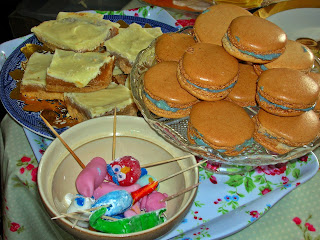 My good friend SH kindly agreed to co-host an afternoon tea with me at her house in Plymouth, so yesterday I brought over some Wimbledon Cake, Lemon Meringue Cake, Peanut Butter Slab and Vanilla & Blueberry Macarons and we had ourselves a sugar-coated get together. 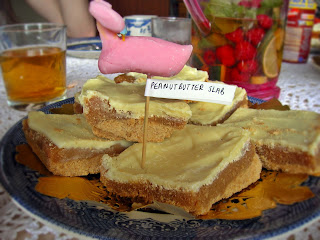 Unfortunately the top of the Wimbledon Cake slid off on the car journey over so one of the edges ended up looking a bit messy after I had fixed it, but miraculously everything else survived the car journey. I'd had a busy morning baking the Lemon Meringue Cake, Wimbledon Cake and some more macarons because my dad seemed very disappointed that I was taking all the Vanilla & Blueberry ones with me to the party. With of all the baking, something was bound to go wrong and lo and behold the Lemon Meringue Cake sponge didn't quite rise properly, and the top cake broke apart as I was applying it to the cake. I was not discouraged, though, and decided to rename the cake as a pudding so that nobody would be the wiser to my error. 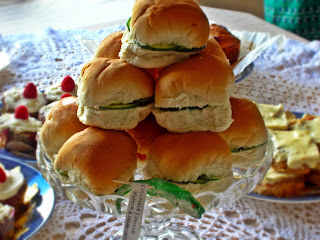 As well as the baked goods that I brought, SH and her sister provided sandwiches, sausage rolls, two types of quiche and some Pimm's as well as some rather delightful cupcakes and Scottish shortbread. G also brought along a delicious Banana & Pecan Loaf Cake which I will definitely be recreating in the near future. She was insistent that she shouldn't take any home with her as her dad was on a diet, so unfortunately I had to take some home with me... 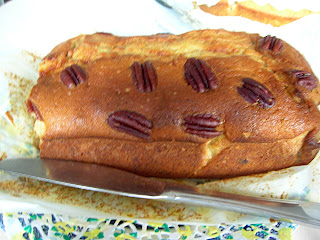 I had two uneaten flamingos left from the Piña Colada Cupcakes  and thought they might make good labels if I could make some more. My sister had said she wanted to try out making fondant animals so I hinted that perhaps she could put them on cocktail sticks and make six so I could take them to the party, as long as I returned them later. 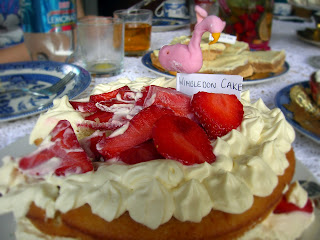 She really did a fantastic job - while we both like to bake, she is much more into fine details and immaculate presentation whereas my take on baking is a bit more slap-dash  - and made a pig (complete with feet and curly tail), a duck, an angry bird, a crocodile, a toucan, a penguin and a koala bear. This just goes to show how easy it is to use fondant icing as this was her first ever attempt at it! I thought the toucan was especially spectacular: 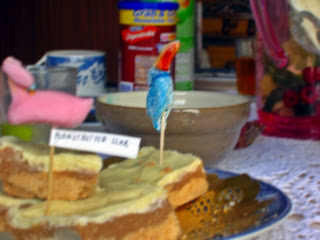 The afternoon was a great success and it was great to catch up with everyone, as some I had not seen since my school days. Weirdly, everyone who came had another year left of university so obviously graduates have better things to do with their time than sit and eat cake! 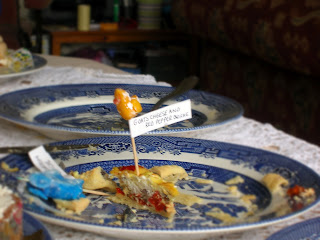 After the sugar rollercoaster was over it was time to go home, laden with leftover cake, for champagne with my cousin, who is staying with us this weekend. I'd only met him once before at the age of ten, so it has been nice to get to know him. He's the only blood relative from my dad's side that I'm likely to meet, so the champagne (all the way from near Carcassonne in Southern France) was well deserved, I think! Somehow I also managed to eat a bit of the nut roast that my sister made us for tea, but after that I was well and truly stuffed! 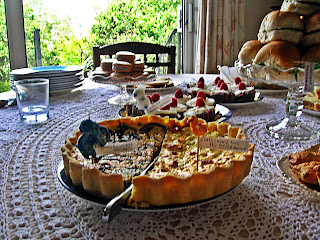 Tomorrow I am off to Amsterdam for four days with S - I can't wait to get away, even if I'm not going to warmer, sunnier climes. The only downer is the 2/3am start tomorrow in order to make it to Bristol airport before check-in closes at 6am. Fun times. I'll tell you all about it when I'm back, when I'll be bringing you a Chocolate & Cherry Rum Cheesecake. Have a good week! 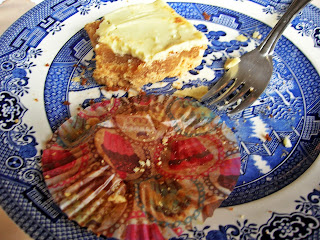