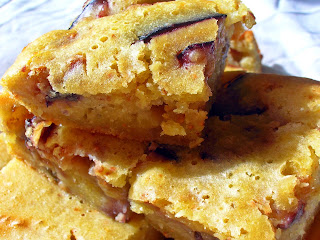 This is only the second time that I've made blondies, and both times they've been based on my standard brownie recipe because my understanding of a blondie is that it's a brownie made with white chocolate instead of dark (by all means, correct me if I'm wrong!) These are actually pretty low calorie since I based them on the recipe for Healthy Brownies that I posted back in January - let's just say I ate a little too much carrot cake and now I need something a little more forgiving in the calorie department. Not only are they low calorie, they are also exceptionally tasty. Gooey and not too sweet, with a hint of flavour from the rum, you would never know these were meant to be good for you.

My earliest memory of figs is when my parents bought chocolate covered figs from an Italian vendor in Tavistock Pannier Market - they tasted amazing! The act of breaking through the chocolate coating to the gooey fig below is a memory that has lasted me what must be coming up to ten years, and yet I've not eaten any for almost as long. This needs to be rectified!

Though the recipe was based on my Healthy Brownies, I did make a couple of alterations aside from the obvious change of chocolate type. I realised too late that I was meant to use light mayonnaise in the recipe so instead settled for standard light spread; I also added a teaspoon of  nutmeg because I read somewhere that it enhances the buttery taste in the final product, so I've been experimenting with it a bit. I've got a thing for spices at the moment (reaching further than my normal paprika obsession with savoury food) so had to restrain myself from adding anything else to the mix and ruining the rum and fig flavourings. I'm saving a spice extravaganza for my next foray in the kitchen later in the week, which I'll tell you about once it happens. 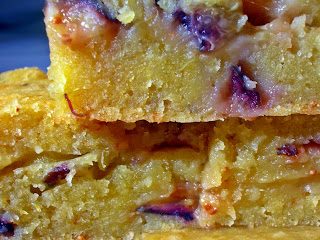 There was a wonderful aroma from the batter when I mixed the wet ingredients with the dry ones. Rum and white chocolate apparently go well together: I must investigate this further! In the mean time, have a go at these. I highly recommend them for a spot of afternoon tea, or similar - if you'd rather go for the high calorie version, just use real butter and 500g caster sugar instead of the fruit sugar.


Recipe
For more tips on baking in a manner that will not induce a heart attack, take a look at Healthy(ish) Baking.

This recipe is a shoe-in for two challenges this month. The first is my very own blogging challenge, Baking With Spirit, where the challenge is to bake with a different type of alcohol each month. This month the alcohol of choice is rum, so these tie in nicely.

The second challenge is the One Ingredient Challenge, hosted by Laura at How To Cook Good Food and Nazima at Working London Mummy on alternating months. This month is Laura's turn and she has chosen figs as the ingredient of choice.

As mentioned above, I'll be back with a spice extravaganza, probably at the weekend, but you'll have to wait and see!