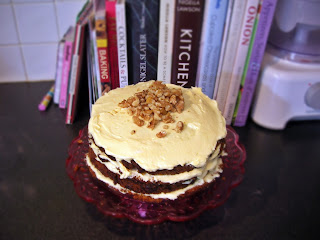 I'm trying to knock this post out at lightning speed because my housemate (the first of six) is arriving any minute and I want to get to know her rather than greet her before hurriedly rushing back upstairs to finish this post. She's been really helpful with setting up bills and reading meters for me when I was in Plymouth, so to thank her I've made her a carrot cake, which I've been told is her favourite. Regular readers may recall that I made another carrot cake way back in April, but it had its flaws: the icing was too sweet and the cake was not dense enough.

Well, you'll be pleased to hear that this one has fixed those things. In the interests of changing things up, I also swapped the raisins for walnuts and reinvented the icing by adding cream cheese to Faux French Buttercream (pioneered by Bravetart) to create the best cream cheese icing I have ever made. I can't remember all the types I have tried as I've had my fair share of carrot cake over the years, but this one has to come close to the top. It is smooth and tangy, like a good cream cheese icing should be, and is not as intoxicatingly sweet as my previous icing. Needless to say, I'm pretty pleased.

Until I sliced the cakes in half I was convinced that something had gone wrong because the batter seemed more carrot than cake mix, and seemed to have browned a little too much (to be fair, this could be the oven's fault as I'm still getting used to its whims). However, when I cut them in half I saw that they were actually looking pretty fluffy and had retained a good density - hooray!

I wanted the cake to be four layer - I may have gained a penchant for the dramatic ever since making my sister's Eight Layer Kahlua Cake - but had to make do without my palette knife and turntable because they are still at home while I patiently wait for my parents to send the rest of my baking gear up to me, so the cutting was not as uniform as I would have liked. I managed to disguise the almost-mangled slices with buttercream, though, so it's all ok. Worry not! 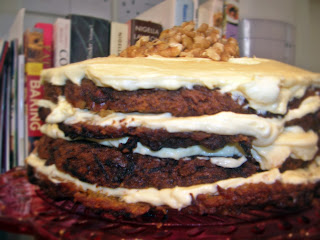 I followed a tip that was tweeted by Melissa at The Baked Equation and added a tsp of grated ginger (though I just re-read the tip, and apparently I was meant to use 1-2 tablespoons) which was supposed to bring out the flavours of the other spices. There was definitely a subtle spiciness to the cake but I couldn't taste any ginger, however I may just need a second slice of cake to determine whether the tip worked or not. I would recommend this cake to those of you who are not keen on the overly sweet and those who love a good piece of carrot cake. There can never be too much carrot cake!


For the icing:
Recipe

For tips on how to make this cake a little better for you, take a look at Healthy(ish) Baking.

I am really excited for tomorrow as I'm going to be bringing a new blogging challenge to the table. What does it entail? Check back tomorrow to find out!