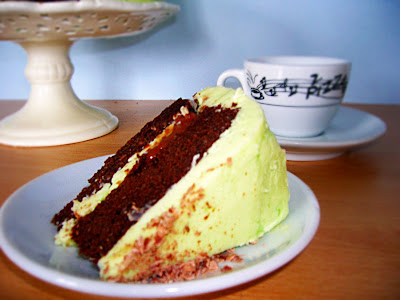 I've been dreaming of this cake for a couple of weeks now, but had to wait until today to finish it off for a couple of reasons. First, I was in Liverpool for almost a week at the start of December and didn't have any of my cake decorating stuff with me, so making a proper cake was out of the question (instead I made gingerbread, which I'll tell you about soon, and a chocolate log).

When I got back from Liverpool I only had four days until my journey back to Plymouth, so there was no time to make and eat a cake. When I finally got back to Plymouth on Saturday I made the cake before realising that there was no mint flavouring in the house and I couldn't easily reach a shop because I live in the middle of nowhere and the car I drive here was neither insured or taxed. It was also questionable whether the car would even work, since it had been off the road for almost a year. I decided to freeze the cake until I could make the icing and decorate it.

Finally, yesterday, tax disc and insurance certificate in hand, I made it into the civilised world (just barely - the car emitted some worrying fumes from the bonnet whilst in traffic). In the end I decided to use Creme de Menthe instead of peppermint flavouring - because why shouldn't I spike my cake with alcohol? It's Christmas time, after all! 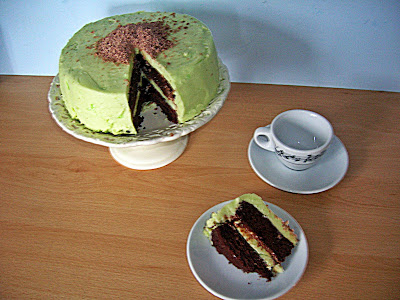 The batter for this cake tasted amazing, so I knew I was off to a good start. The Creme de Menthe adds a great colour to the icing so I didn't have to add any food colouring. The mint icing goes well with the chocolate cake, and the alcohol gives a bit of a bite to it, which is certainly no bad thing. This is definitely a good cake to make at this time of year. I had some ganache left over from the Cinnamon Biscuits I made at the weekend, so I used it as a second filling for the cake.

For the ganache:
For the mint Swiss meringue buttercream:
Recipe 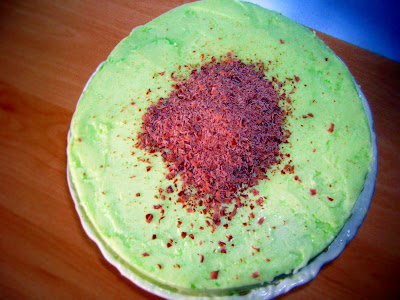 On a side note, I'm really hoping I get a better camera for Christmas - I'm just about at the end of my tether with the one I currently use. It blurs pictures very easily and it takes a lot of work to make the pictures good quality, though to be fair to it I used the same camera on my Italian exchange in 2005, so it's lasted a long time. In the mean time, please bear with me when my photographs aren't clear, or if the colouring is a bit off.

I'm entering this into my monthly challenge, Baking With Spirit. The challenge this month is to bake with whatever you like, though a festive theme is preferred. I associate mint-chocolate combinations with Christmas, so I think this falls into the category.