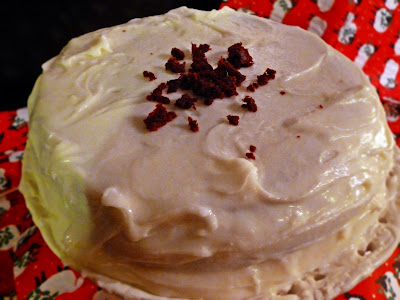 This is another cake that I've been plotting for some time. Bravetart made a Red Wine Velvet Cake a while ago, and since then I've been waiting for an opportune time to try the recipe. I had considered running a wine challenge for October's Baking With Spirit, but since it's still early days for the challenge I decided against it and gave you beer instead!

This is only my second attempt at something red velvet-related: I did try a Valentine's day cheesecake with a red velvet base, but thanks to some natural colour-filled food colouring the base turned brown while it cooked. This is why natural additives aren't everything and chemicals can be good, people!

I made a batch of mulled wine today just for the occasion, though you can buy ready made mulled wine from retailers like Marks and Spencer. I find that I always have a dilemma about what to do with the mulled wine when it's ready, and (in the most classy way possible) I have so far opted to pour it back into the wine bottle. I'm sure you have a nice jug, or even a vase, which you can use for decanting your wine in a much more demure manner, though.

Of course you could make the mulled wine in a quantity suitable for this recipe, but don't you think you'd be missing out on the fun of sharing the rest of the bottle with your family or friends? Plus what better drink to have with a slice of Mulled Red (Wine) Velvet Cake than mulled wine?! 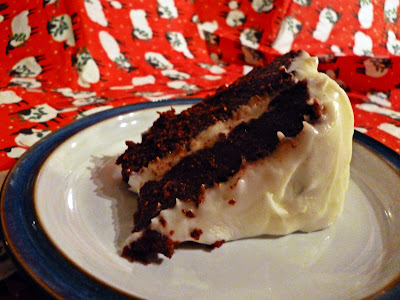 As mentioned above, this recipe is adapted from Bravetart's Red Wine Velvet Cake. I converted the ingredients to metric, scaled them down by a third, used vanilla sugar (see below) instead of vanilla and sugar and mulled the wine. I also found I had to add some red food colouring to the batter so it was actually red and not chocolate-coloured. Naturally, I had to do my own thing once I knew what the ingredients were so I made up the recipe using my basic cake knowledge. It seems to have gone pretty well, though.

I think we are all feeling the glutton that this season brings with it, so I dialed down the sugar and fat content in this cake by exchanging 2/3 of the sugar with Truvia and using low fat cream cheese and butter. I used a traditional icing made with cream cheese and icing sugar, but if you're watching your sugar intake more than your fat you could use this cream cheese french buttercream  instead.

In case you're wondering, the cake tastes very good. It's incredibly moist and the spices from the wine come through nicely. It's more a deep red than your standard red velvet cake, and in the photos it looks more brown than anything, but I promise you it's definitely red in real life. Enjoy! 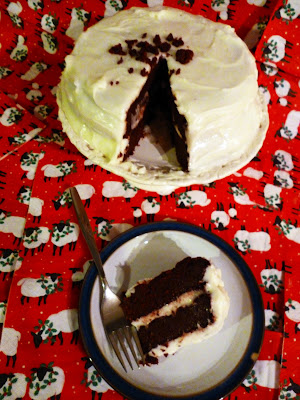 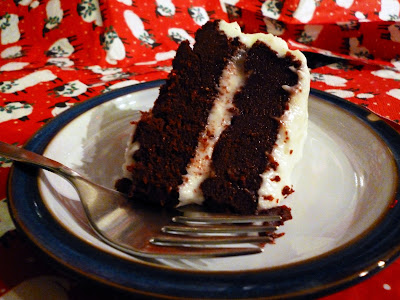 Finally, if you're wandering what vanilla sugar is, it's extremely easy to make:

All you do is take a couple of vanilla pods (one for every 100g or so), split them and stir the seeds into your sugar. Then put the sugar and vanilla pods into a jar or airtight container, seal it and leave for at least 7 days. You're done! 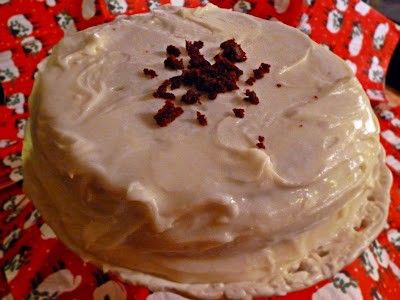 This is definitely a festive cake, so I'm entering it into this month's Baking With Spirit, which is hosted by yours truly. The theme is any alcohol you desire with a preferable festive twist, so if you think you have something that might fit in then hurry to get it in as the challenge closes on Friday!

I'm also entering this into the Cook.Eat.Delicious-Desserts! monthly food event because the theme this month is cake. The event is being hosted by Spicy Foood, with a giveaway for a nice looking cake book too. 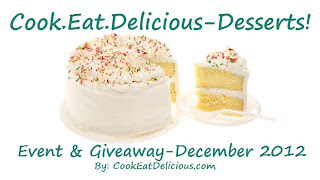