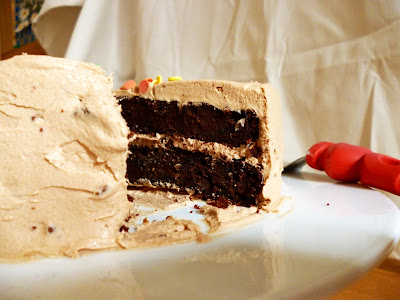 I know this blog is full of sugar, eggs, butter and flour, but let's all just take a moment for the aubergine. 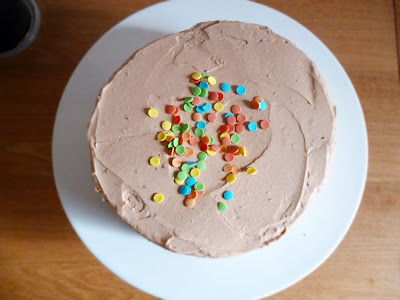 I love aubergines. They are so versatile, and pair wonderfully with many vegetables, including Mediterranean ones. My favourite thing to do with them is to thinly slice them, fry them with courgette and onions, cover them in paprika and brie and eat them just like that.

And now we know why this is a baking blog and not a savoury blog. 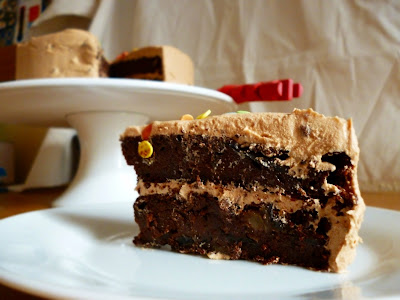 I was first alerted to the concept of putting aubergine in a cake by L, who I am lucky enough to have known for more than ten years (!), who showed me this flourless Heartache Chocolate Cake from Edinburgh Eats. I wasn't in the mood for a flourless cake, so I put the aubergine in this cake instead. I sort of wish I head read how Katey, the author, had prepared the aubergine, though, as it took a bit of work to get my food processor to grate it into uniform pieces.

I iced the cake with Rosie at Sweetapolita's Nutella Cloud Frosting (minus the Nutella). I do love this icing, as it's light as air and if you use milk chocolate as I did you create something that tastes like a Kinder Egg. The milk chocolate melted in that way it does sometimes, where it leaves behind some harder, almost-burnt bits of chocolate. To me these bits don't taste burnt so I left them in the icing, creating a chocolate chip effect which I quite like. 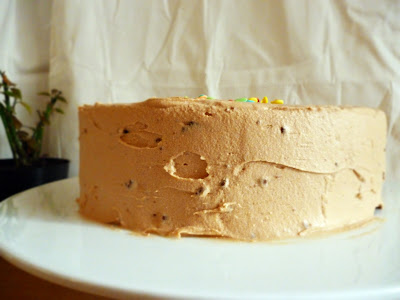 All in all, the cake turned out really well, and the aubergine makes the cake really moist without imparting any strong flavour. I was worried that the icing had turned out too runny, but it was perfect, making this cake a stark contrast to last week's recovered disaster. I'd definitely recommend that you make this cake; if you're not a fan of milk chocolate I think dark chocolate would actually work just as well if not better, so by all means use it instead. 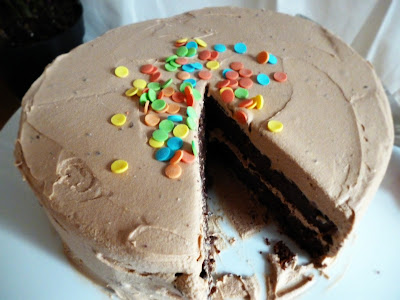 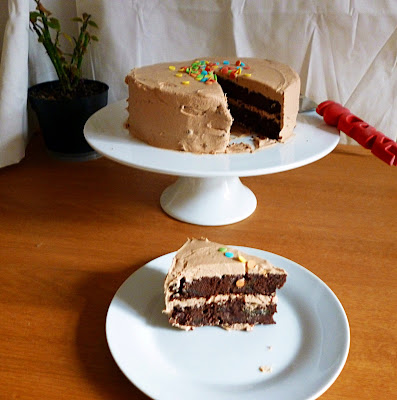 And now time for a mini rant: I don't know if this is happening for everyone or just me, but Blogger has been running ridiculously slowly for me this week. I finished this post around half four yesterday afternoon, but the photos took two hours to load and the final one that I wanted to place here instead of this rant just wouldn't upload! I don't know what my upload speed is doing, but speedtest.net seems unable to guage it - always a good sign. I'll try and upload the final picture later, but in the mean time this rant will have to suffice for a lovely picture of cake. [Update: It works again! Hooray! I also hope you enjoy the view of my weedy plant. You may not believe me, but it's actually alive and appears to be growing...]