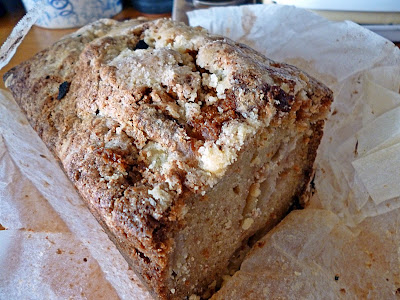 It's been an eventful week here at the chateau. For those of you who don't read the blog regularly, or simply don't have the capacity in their life to remember every single detail about mine (why not?!), I'm currently abroad in the South of France, near to Narbonne. I spent a couple of days last week sightseeing in Barcelona, then took a train here on Friday. This is the view from my window: 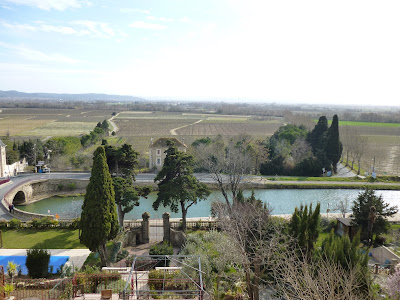 Not bad, eh? Not to mention, the temperature here has been about four times the current average in Newcastle, so I'm not at all sorry to be abroad at the moment. On a clear day you can see all the way to the snow-covered Pyrenees; the whole area is incredibly picturesque and makes a change from my standard city holidays (which I am by no means tired of).

The volunteering involves five hours of work, five days a week, in exchange for three meals a day and a place to sleep. So far the volunteering has been pretty varied. I've done some organising of cabinets, some cleaning and, most shockingly of all, some gardening. While I love cleaning and am quite partial to some organisation, until this week the concept of kneeling in the dirt and picking at weeds all day was not one that filled me with joy. I actually got quite into it, though, and found that I really dislike this one particular weed which has a bulbous end and was literally everywhere. I can't quite comprehend how I felt when I found another one - like coming across someone you really don't like but have to work with on a project that requires constant discussion, but in weed form. 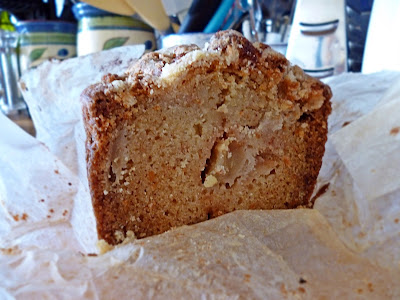 The task that I have so far enjoyed most has been making a cake. I was asked to make a cake with fruit in, so I came up with this Apple & Cinnamon Loaf Cake. I was also making an apple crumble, so I made a little extra crumble to sprinkle on the top before cooking. If you've not had it, crumble mixture goes brilliantly on top of cake, particularly fruity loaf cakes.

I think the oven was a bit too hot when I made it so the cake was a little bit drier than usual, but I still got pretty good reviews, and was otherwise pleased with it. This is definitely something to make for an afternoon tea, and would slice up well for a picnic.

For the crumble mix
Recipe 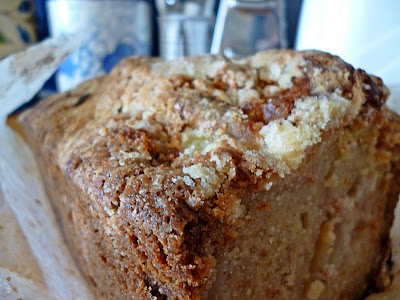