Barcelona Pt I: Speaking In Spanglian 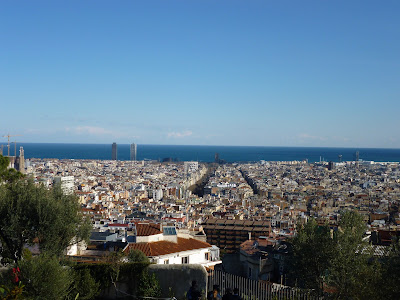 As explained in my last post, I am currently on holiday and spent the past two days in Barcelona playing tourist.
Not a total tourist though; I really dislike how the English are particularly known for not bothering to speak the language in a foreign country (some members of my family included), so I always endeavour to learn a few key words and phrases. I speak very little Spanish, but learned Italian in school, so due to the similarity of the languages I have managed to get away with linking what I do know in Spanish with Italian connectives without having to resort to English too often. I don't know of a word for speaking a combination of Spanish and Italian (for example, Franglais is slang for speaking a mixture of French and English), so, as you can see in the title of this post, I made one up. 'Spanglian' is a satisfactory merger of the words, at least to me. Spanglian may not go down well with a Spanish or Italian teacher, but the Spanish waiter who served my lunch yesterday seemed to understand me ok.
My first day in Barcelona was very wet. Huge droplets of rain were falling from the sky all day - enough to soak me on a five minute walk from the airport bus to the youth hostel - and my umbrella conveniently refused to open so I walked to La Sagrada Familia without it. I got a few deserved looks from passers by for being so wet, but it couldn't be helped. My trek through the rain was worth it, though, as the basilica is a magnificent feat of architecture. From the outside it was impressive, but stepping inside and seeing the impressive pillars and minute details really took my breath away.
Yesterday, I ventured down to the waterfront. The weather had much improved and I was bathed in glorious sunshine. It may have only been 13C, but that's a whole ten degrees more than what I've been used to for the past four months so this was refreshing indeed. I took special delight in being able to wear my spring/summer coat (and not button it up!), as opposed to my winter coat (buttoned all the way up), scarf, hat and gloves as I had been wearing only two days earlier in Newcastle. 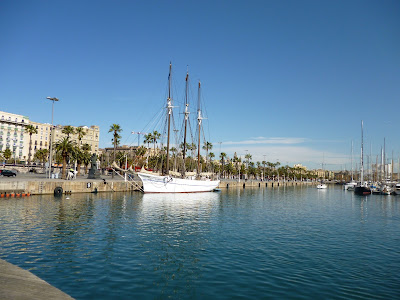 The palm trees and blue Mediterranean sea made me almost forget that it was still just the spring. There's plenty of interesting architecture on the waterfront as well, including buoys in the shape of men, and a Lichtenstein statue that was apparently built as an ode to Picasso.

Wandering up from the quayside, I came across La Colmena, a patisserie that had been marked out in my guidebook as something special. Naturally, that was all the hint I needed and I came out with this delight: 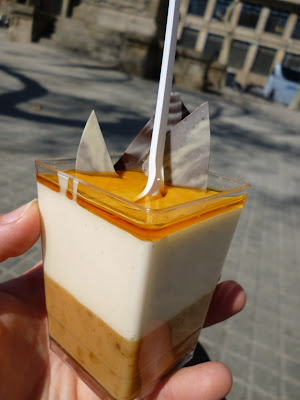 The dessert was called a Xiocolado Mango, and consisted of a layer of some kind of hazelnut compote, followed by a layer of vanilla custard/mousse and topped with a mango syrup. Of course, chocolate shards were added as a finishing touch. This turned out to be the only dessert I tried in Barcelona other than a creme caramel, which was the final course from a 'menu del dia' (menu of the day) I had yesterday lunch time (the restaurant where I tried my Spanglian on a busy waiter, as mentioned above). The other two courses were a pile of green beans and a freshly caught and pan-fried fish, served with a lone boiled potato. I also got a glass of wine, all for €12.50. Not too shabby.
I thought I was pretty brave with the fish, as it still had its tail, backbone, skin and numerous other bones. Normally the only types of fish that I go for are the ones where you can't tell they used to be a fish, i.e. they are covered in batter or breadcrumbs and are skin and bone (and tail) free.
This morning I left Barcelona for Lezignan, near Narbonne, France, for a volunteering stint at Chateau Ventenac. The chateau is as beautiful as it was in the pictures, and the owners and other volunteers have all been very welcoming and friendly. No doubt I will be doing some baking while I'm here! I'm headed back to Barcelona again after spending the next two weeks in France, so I still have plenty of time to try out other delicacies like paella and tapas. Does anyone have any recommendations for any cakes or sweets I should try in Spain?