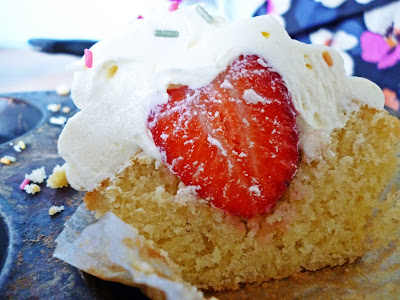 This weekend I'm taking a big step and driving my car (which belonged to my parents until this week) up to Newcastle. The longest distance I've driven before is up to Bristol from Plymouth (about 2 hours), so I'm going quite a bit further, but it has to be done some time so there's no time like the present. 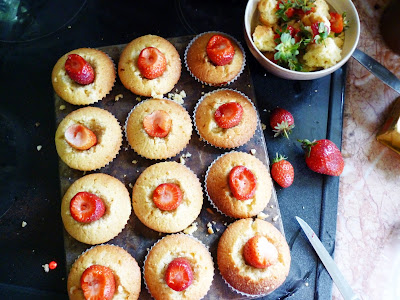 I'm especially excited because I'm going to Cadbury World today. I've never been before, and am very excited by the copious amounts of chocolate I'll be exposed to. I've been picturing an almost Willy Wonka-esque factory, but I know I need to tone down those imaginings just ever so slightly.

I'm meeting up with my ex-housemate, who was also my biggest cake eater when we lived together. I've sent him a lot of cookies, and even managed to post a battenburg cake for his birthday, but I don't think cupcakes would translate very well in the post. This is a pity, because none of my housemates eat/like cake. I know - who are these people?! Anyway, since we're meeting up in person I've made some cupcakes to give him, since they are less likely to be squashed and unappealing by the time I reach him. 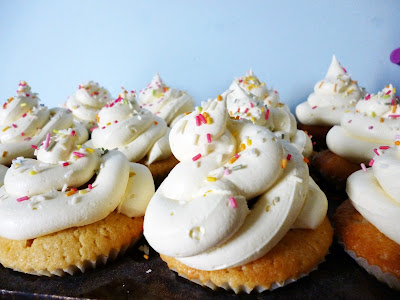 I'm really pleased with these cupcakes. The icing (adapted from Sweetapolita) is soft and airy, and the strawberries in the centre help to cut through its sweetness. These are actually surprisingly simple to make: all you need to do is make the cupcakes, cut a hole in the middle and fill it with a strawberry, then cover it over with icing. The icing is as easy as melting chocolate and blending it into icing sugar and butter.

I strongly encourage you to give them a go, as they managed to entice even the least sugar-loving members of my family. Cupcakes for everyone!


For the icing
Recipe 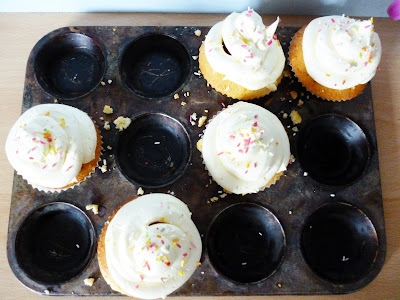 I'm entering these into Laura at I'd Much Rather Bake Than...'s blogging challenge, The Biscuit Barrel Challenge. No, these aren't biscuits, but she says anything that will fit into a biscuit barrel goes. I'm not saying these wouldn't make a big mess inside the barrel, but they would totally fit. Laura's theme is In Season Fruits, so strawberries fit in perfectly here. 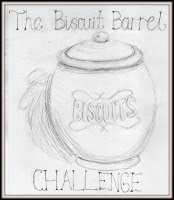