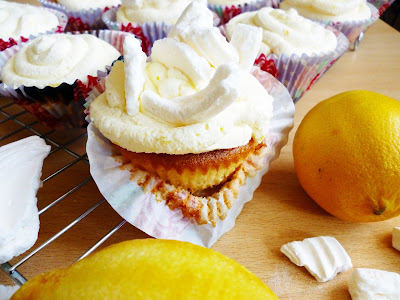 However, I am not too fussed about the weather outside because I received some exciting news this week. I've been offered a new job, and am moving to Birmingham at the end of August. This is the culmination of months of job applications and despair that I will never leave the Cambridgeshire Fens. I've been living here for two years now, and have had enough. There is some beautiful scenery here with endless landscape (because there are no hills here - the land was a swamp until steam pumps were brought in a couple of hundred years ago), but there isn't a lot to do for a single person with no roots in the area. Now I have an opportunity to move on, and I can't wait to live in a busy, cosmopolitan city again. 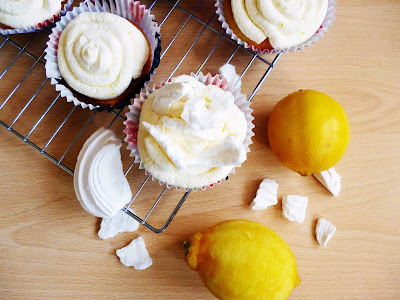 Wherever you are in the world, the smooth lemon flavour in these Lemon Fool Cupcakes is sure to make you feel a little bit like summer. I was originally planning to make Eton Mess Cupcakes, but my raspberries went off before I could use them. The whole point of making the cupcakes was actually a ruse to use up a tub of meringue that I may have bought when I was still a student (so we're going back more than two years...) - what better way to decorate a cream-topped cupcake than with meringue pieces?

Lemon Fool is not that well known these days, but is a dessert using lemon curd, whipped cream and possibly meringue pieces. Think summery BBQ and garden party settings. I first heard of it in a recipe book that I was given for my GCSE Food Technology course, which was full of useful gems but hasn't been seen since I left my student halls in 2010, my to my chagrin. 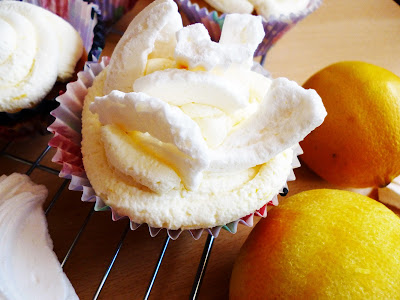 These cupcakes are made with lemon juice to give a smooth lemon flavour, topped with sweetened whipped cream which has been swirled with lemon rind, then sprinkled with crushed meringue pieces. Of course, you can make your own meringue or even use newly-bought meringues, if you so desire. The Lemon Fool Cupcakes went down well at work, though there was some debate about whether the meringue still tasted fresh... 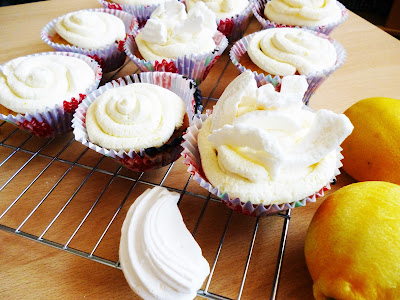