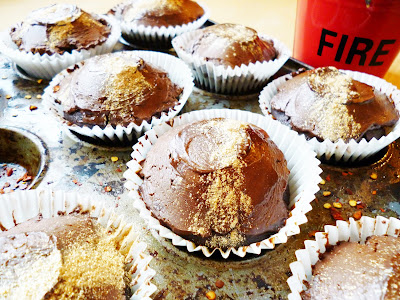 Last weekend, in the midst of the heat, I met up with my mother in London. She lived there for many years during her twenties, so she took the opportunity to show me her old haunts and one of her old homes near Hyde Park. It was a nice walk down memory lane for her, and a chance for me to learn some things I never knew about her youth.

In her many years of living in London, my mum never went to Borough Market - perhaps it has only become such a bustling hub of food in recent years? In the two years since moving from Newcastle to Cambridgeshire, I've been getting to know London a little better and make fairly frequent visits to the market. The tables were turned, and this time I was the tour guide. My favourite parts of the market are the cheese counters and the cake stalls. I love the aged comté best, though I have to say my enjoyment of the cheese counters is bolstered by the flirty men who often sell them. For some reason, selling cheese and flirtation go hand in hand, or at least they do at Borough Market. My mum really enjoyed the market, and bought some bread and French cakes to take home with her. Success! 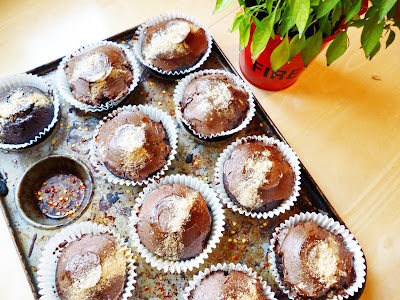 This is actually my second attempt at these cupcakes. I made them several months ago, but the tequila wasn't detectable and nor was the chilli powder I used, so essentially I had made fancy chocolate cupcakes. This time, I used chilli flakes to disperse the flavour much more effectively throughout the sponge, and a tequila syrup (seen before in these Tequila Slammer Cupcakes) adds a nice tequila background. These Aztec Cupcakes got rave reviews from my friends at work, and, as an added bonus, my good friend Kate found a double use for the edible gold glitter in the form of makeup. 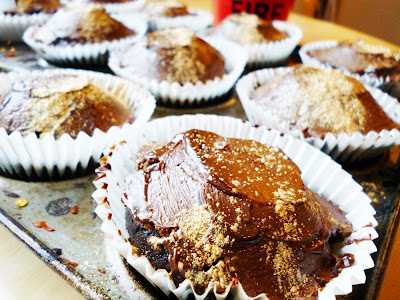