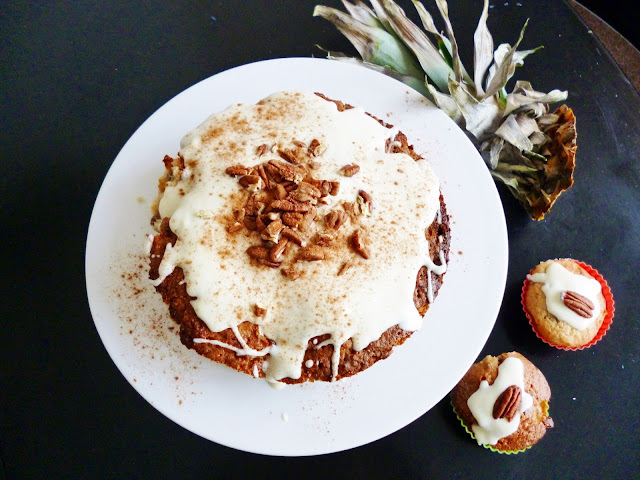 I turned 25 last week! Happy birthday to me. It was a fun day of shopping, watching The Hateful Eight and pizza with friends. In the UK and much of Europe, reaching quarter of a century in age means that I am officially no longer a Young Person, and therefore travel and other parts of life are about to get a bit more expensive. 24 was not such a bad age: I got a new job and moved to the city I had been hoping to live in, I went to Stockholm and I experienced my first hangover, to name but a few of the momentous events of the year. Here's to another good year, though I'd be happy if the hangovers could remain in the past ;)

This Hummingbird Cake is another example of baking with low levels of saturated fat and higher levels of unsaturated fats, which are widely believed to be better for you. This month I'm trying to bake healthier versions of my cakes; you can't stop me baking but I understand that the time of year calls for a little restraint on dessert. This cake is hence a compromise on that.

I used olive oil instead of butter, though to be fair Hummingbird cake traditionally uses oil anyway. The cake is packed with pecans, high in monounsaturated fat, and bananas and pineapple, which don't contain much fat at all and are generally pretty good for you! The icing is more of a cheesecake batter than traditional cream cheese icing. I find the icing sugar variety a bit too sweet, and this icing rounds the cake out nicely, though it's a little runny so I advise that you use it sparingly. I highly recommend it! 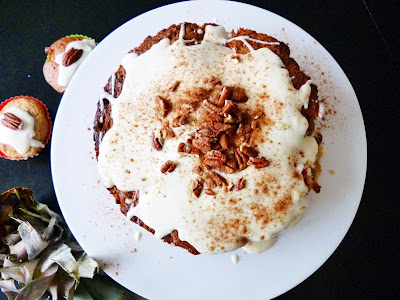 The cake recipe was copied directly from the Hummingbird Bakery Cookbook, but I only used 1/3 the quantities because I wanted a smaller cake. I won't list their recipe for copyright reasons. The recipe below is for the icing, which can be used to decorate and fill a three layer cake, as in the the book, or you can use 1/3 the quantities below and make one layer like I did. If you don't have the cookbook mentioned above, here's a similar recipe from Jamie Oliver.