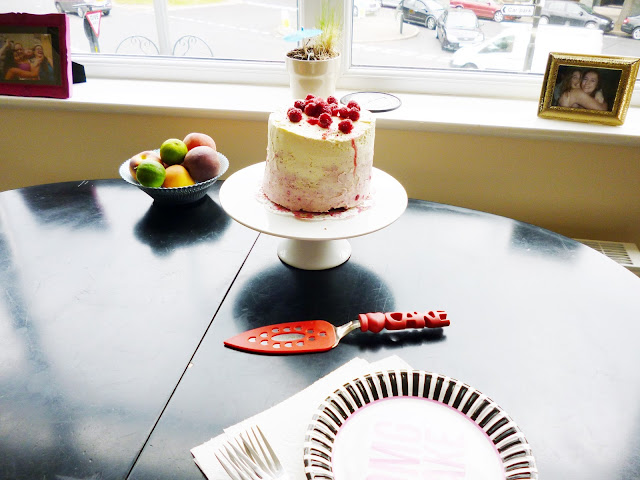 I love living in a city. Having lived in Birmingham for nearly 10 months, the novelty of having conveniences like a supermarket, clothes shops and a very cheap greengrocer less than a 5 minute walk from my house has not worn off. Don't get me started on the choice of bars and restaurants that are a short walk from New Street Station. If you've lived in a city for your whole life you might think this wide-eyed enthusiasm is close to insanity, but I spent my first 18 years living in the middle of nowhere, and later another two years in a dozy market town. Birmingham is awesome.

The raspberries for this cake were bought from the aforementioned greengrocer - 375g for £1 is a very good deal, in my opinion! I made the cake for a 'Summer' themed event at my local Clandestine Cake Club (which I also happen to run). I joined the club so I could meet new people, and though it has been hard to attract more than a handful of people to these events, I've made at least one friend through it so far. I would encourage anyone looking to meet new people to sign up to this club, as there are groups worldwide and it's a good excuse to bake and eat cake, not forgetting that it's completely free. 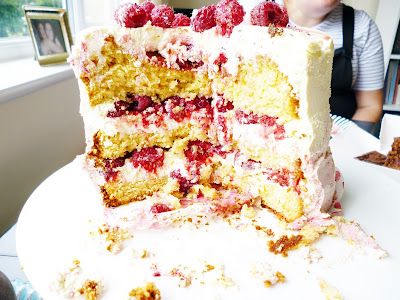 I know I haven't been around a lot this year... I have my reasons, but this does not mean that I'm giving up on Cake Of The Week; you might just hear a little less from me. If you miss me, you can follow me on Twitter and Facebook, where I am much more vocal. (I have over 1000 followers on Facebook now! Wow!! I am flabbergasted.) 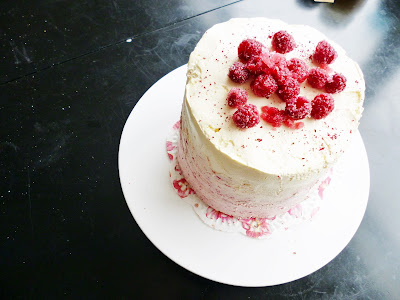 Before we dive into the recipe, I'm going to level with you. To make the ombre finish on the side of the cake, I used freeze dried sour cherry powder instead of freeze dried raspberry powder. I know. But, the cherry powder is pretty old and the flavour was faded enough for it not to be obvious what I'd done when we sat down to eat the cake. And I didn't have any freeze dried raspberry powder. Though guys, I'm sure this cake could only be enhanced by matching the flavour profiles in the decoration. Do what feels right to you. 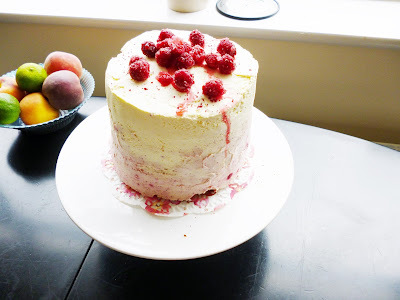