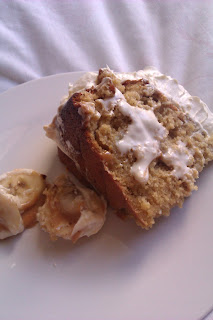 Xanthe Milton (writer of the wonderful baking cookbook, Eat Me!) believes that if you are going to bake a cake you should be in at least a calm and collected mood so that your cake is made with happy thoughts; if you don't do this, the cake will not turn out well. After today, I am in total agreement with Xanthe's theory: the actual cake went very well, but as soon as I started making the filling things started to get worse and worse as I got more and more stressed.

The stress came from the fact that I don't have a piping bag and instead have a set of pots with squeezy ends for piping that came in a fancy box and are sold as being really easy to use. In fact, these magical icing tubes are a nightmare to fill, use and clean, especially because they need refilling every twenty seconds and only take a dollop of cream the size of a teaspoon at a time when filling them, and even that is pushing it. As I was filling and refilling the pots, the bananas started to slide off the cake as the caramel had turned a bit runny. By the end of the cake, the middle had all but squeezed out of the sides and I had given up on fancy and attractive piping for just putting the damn cream on the damn cake.

So apologies for this cake's messy appearance. I can assure you that it is very tasty, and it can be cleaned up a bit before serving it to your adoring and expectant fans. To stop the bananas running off the cake, put the cake into the fridge after adding the caramel layers and leave it in there for about ten minutes to make sure the caramel re-sets itself. To stop having a cream catastrophe, make sure you have a good piping bag. Oh, the woes of being a student.

The rainbow cake and flapjacks from last week went down really well - so much so, in fact, that I had a request to make more flapjacks this weekend with my remaining oats.

You may be surprised to know that a piece of this cake is actually slightly better for you than a shop-bought muffin!

There you go, you've made a lovely banoffee cake that is probably far superior to the one I made. Congratulations.

Next week I'm intending to follow the theme of turning a dessert into a cake by making a lemon meringue cake, so watch this space.