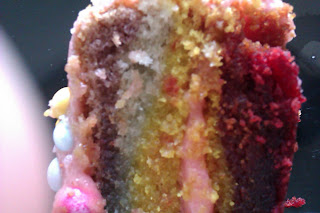 This was a birthday cake for M*, who is 22 today, made primarily by E and I, but with mixing help and input from D and N. E, M and I were discussing the idea of a rainbow cake and liked the sound of it, and when we started discussing what on earth M wanted for his birthday we came to the conclusion that this would be an awesome birthday cake. When he wasn't listening, E and I decided that making it a gay cake would be appropriate (despite M's heterosexuality), so we made the icing pink. Here it is: 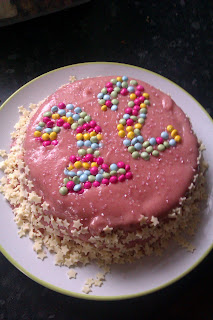 Isn't it awesome?!
I admit that decoration isn't my forte - I lack the patience and precision that makes a truly awe inspiring cake (and it doesn't help that three years of chemistry forces the creativity out of you) - so it will come as no surprise that the dodgy-looking 2 on the left was done by me and that the precise and perfect 2 on the right was done by E. E got very excited when doing the stars around the edge of the cake (while I was still trying to make my 2 look like a 2), but it turned out pretty well in my opinion. The pink glitter was a necessity for the gay birthday cake. We considered writing something around the sides of the cake, but the stars were enough, we thought.

If you want to buy the decorations we used, you can get them from the cake section in Morrisons.

I had almost run out of icing sugar and had forgotten to buy more, so looked for a recipe for soft icing that didn't need icing sugar and found this one, but found out the hard way that when adding the flour mixture to the creamed butter and sugar it's probably better to add the creamed mixture to the flour one gradually, rather than the other way around, so that lumps don't form. To fix the lumpy mixture I threw the icing into my blender, along with the icing sugar I had left (about 150g) to thicken it up. The lumps disappeared but the icing was still too runny, so we added flour to thicken it. Basically, it's so much easier just to be prepared and have enough icing sugar for buttercream in the first place, so that's what's in the recipe.

Also, a note on food colouring: I used the liquid version commonly found in most childhood memories and supermarkets, but I hear that the gel type gives a much stronger colour and is generally better, so if you can you should use that. 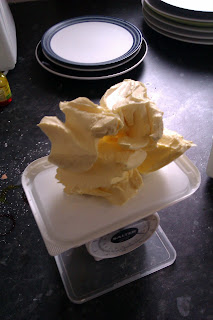 200g Butter
400g Icing Sugar
Food Colouring (we went for pink because it would add to the gay vibe of the cake, but you can use whatever colour you want. If you want a white cake, don't use any colouring!) 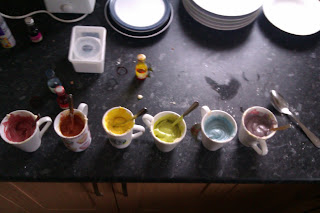 I am really pleased with this cake, especially because the rainbow effect worked! I do admit that we didn't think the pink icing in the middle through,  but I wasn't expecting perfection.
Let me know what you think, and if you made your own then please  send photos or at least tell me how yours went, how you improved it etc.
See you next week!
*I don't want to disclose the names of people without their permission since this is online and anyone in the world, e.g. one of their arch enemies who has been biding their time and waiting for any clue as to their whereabouts, could be reading it