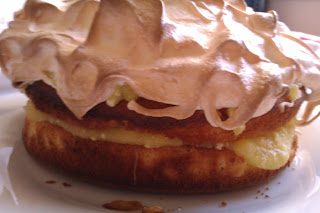 This melt-in-the mouth twist on a traditional recipe will have your fans begging for more. When I mentioned the idea to my housemates a couple of them had their doubts, but I've already had a stellar review from one of them. The sponge is a bit crumbly, so you may wish to add an extra egg to the recipe below.

Last week's banoffee cake was very moreish and I really liked it; my housemates didn't eat too much of it, probably because half of them don't like bananas and also because it was kept in the fridge rather than in plain sight, which can means it was probably forgotten. I therefore guiltily confess to eating the majority of it, but it was totally worth it!

L very generously brought a giant cupcake mould for me up from London, so naturally that's what's being made next week. I'm not sure what to do with the filling or decorations, so throw any ideas my way. I also bought a seive this week so there will be no more lumpy icing disasters.

I did intend to take a picture of a slice of the cake, but the filling blends in with the sponge because they're both yellow so it wasn't very picturesque; I just ate the slice instead. Tasty. I think the melt-in-the-mouth of the sponge also contrasts nicely with the crunchy meringue on top, adding all the more to the aesthetic appeal to the cake.

Before I show you how to make your own, I've made a post which gives details on all of the basics of baking that I could think of, so if you're a novice or aren't sure you're doing it right, take a look at that before embarking on this recipe. Let me know if you can think of anything else I should add, or indeed anything else you'd like to know.

I would also like to point out that NO mistakes were made in this recipe!!

I hope this cake goes down well; I'm really pleased with it. I'll let you know if it does next week!