[UPDATE: I eventually made a much better giant cupcake here.]


Today I again proved that I am not the queen of decoration. I used the recipe that came with the giant cupcake mould, altering it slightly, and discovered that the people who wrote the recipe didn't want the user to make a cake that's the size intended by the mould; they wanted to mock you for choosing to use their recipe instead. I have therefore scaled up the recipe used - prepare to be horrified by the quantities of things like sugar and fat. I also discovered that the recipe's version of the cake turns out like a cake with a hat on, therefore I made the above cake from the base and the cake below from what was supposed to be the top (hat). If you follow my scaled up recipe instead of the one I used you shouldn't get a strange cake and hat situation.


I was originally going to use cream cheese to make the icing, but forgot about it when I went to the supermarket. If you'd prefer to make a cream cheese topping (think carrot cake style) then just swap the butter in the recipe for cream cheese.

You'll need a giant cupcake mould for this recipe. These are now fairly commonly available, ranging from £5 (Morrisons) to £30 (Lakeland) and above in price: I got mine off E's boyfriend, L, who very kindly brought me one up from London last week. The mould that I have has two halves plus a section that can be placed on top of the base mould in order to leave room for a filling. I'm pleased that I didn't try to use a filling this time because the base wouldn't even have reached this part. 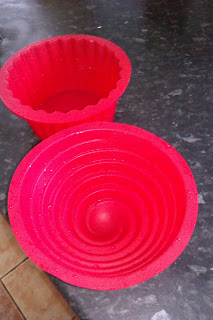 One last note on the mould: yours is likely to be made of silicone like mine is. Silicone is heatproof up to 240C (though why you'd be baking at that temperature is unclear) but not non-stick (unless it says it is) so it is essential that you grease the mould thoroughly with oil or lots and lots of butter. I used butter to grease the mould but it wasn't as effective as it could have been, so I'd advise that you use oil and brush it on with a pastry brush.

Last week's lemon meringue cake went down a storm - I came downstairs the day after making it to find it had been half-eaten by two drunken housemates, leaving a crater in the side of the cake. My only clue that it had not been mice was the pair of forks sat on the cake dish. At least I know it was tasty!

Below are instructions for making today's cake; it is not one of the healthy ones, though if you go for cream cheese icing and use quark then it will be much less likely to clog your arteries. Also, if you don't want a chocolate cake then replace the cocoa with more flour.

Ingredients
For the cake:
For the icing:
Recipe
I think I'll try this cake again at some point. If I wasn't a student and had the money and time to do this again then I would have done, but never mind. Before I did the decoration I envisaged that it would be piled with icing so that it looked like an ice cream type swirl, but alas there were complications with the icing as always.

If some of the jargon in that recipe makes no sense to you, make sure that you visit my page called The Basics. I've added a couple more things to it this week so even if you've already seen it it might be worth checking out again.

I'm not sure what to make next week yet. Maybe a cheesecake, maybe some butternut squash cupcakes or some mint choc chip cupcakes. We'll see. I do take requests at times like this, so let me know if you have any ideas.