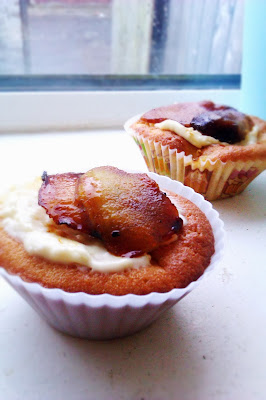 It's a celebratory week in America, and although we don't celebrate Thanksgiving in the UK, our television has been so bombarded with it that the idea of it (and Canada, too, thanks to Perfect Couples, I think) had seeped into my brain. So much so that I felt a very strong desire to use maple syrup in something and also have a big urge to make sweet potato pie, which is now what I'm going to do next weekend.

I therefore present to you these apple and maple syrup cupcakes, which are wonderfully moist and light, and pretty straightforward to make. On top of the cakes are slices of caramelised apple, which I'm quite proud of because not only did they not go wrong but I even managed to avert the fire alarm going off, despite the burnt sugar lining the pan. I think they're set to go down well as N seems to like them, as do I, so there may not be many left after the weekend - just in case you were planning on breaking in and stealing them. 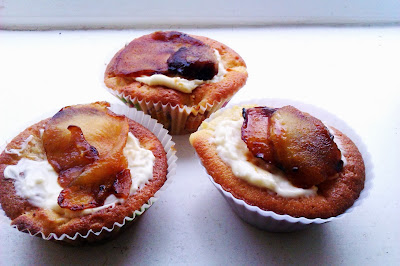 In last week's post I mentioned that I might make caramel apple pie, which I actually did do but it didn't turn out as I wanted. I know that hasn't stopped me posting horrors in the past, but with the caramel apple pie I'm trying to replicate something that I've eaten before and have so far been unsuccessful. I can make the apple pie part fine, but the caramel/fudge topping is proving to be difficult. I've found a similar version in Morrisons before, so maybe if I'm ever in a good mood by the time I get to the bakery section I'll ask them about it.  When I do figure the recipe out I'll definitely post it so do keep your eyes peeled.

As with last week, I had to battle with extraordinarily lumpy icing sugar, but unlike my grandparents I have a food processor so was able to blitz the icing sugar into a fine powder in seconds. I love my food processor.

For those of you who were waiting with baited breath, I finally got the SD card slot working in my laptop - apparently the driver wasn't installed, even though the computer said that it was when I first discovered the problem - and have hence been able to add that other picture to the flapjacks post. That was actually my first post, so you can see how long it's taken. Those flapjacks were pretty tasty so I'd go and try them out if I were you. Only after you've tried these, though. 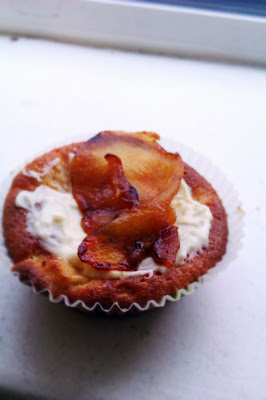 For the cake:
For the decoration:
Recipe
One thing to note for students/people who aren't rich is that maple syrup bottles cost about £3 per 250ml, so maybe decide how much you want to make these cakes before you go and spend that much. Maple syrup is tasty on pancakes and in porridge and yoghurt, too, should you be lost for ideas for using it up.

As always, if you didn't understand any of that jargon then please visit The Basics.

I'll see you next week, when I'll probably be making sweet potato pie. Try not to freeze to death in the mean time.