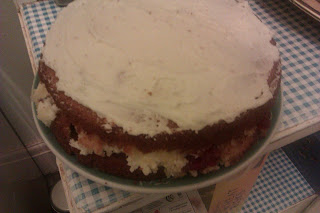 This weekend I travelled across and down the country to Liverpool, where I visited my grandparents. I had a great time and made them this Victoria sponge. They and their American carer, who had never had home made sponge cake before (!), loved it - as did I. On my trip I also picked up some of their old records, including swing music from 1944 and 1945, which I thought were quite special.

Last week's jelly cheesecake was so moreish that it was gone within three days. I especially liked the biscuit base contrasting with the cheesecake and the smooth jelly. I even got my food critic round to liking it in the end.

After so many runny buttercreams, I finally decided this week that it wasn't good enough and added the butter gradually to the icing sugar. This worked effectively, and I shall be using this method in the future. My first problem when making the cake was the cake base sticking to the tin because I wasn't used to them and apparently butter wasn't good enough to grease them with, resulting in a broken up base which carefully hidden under everything else and was hence undetectable when it was served;  my second problem was that some moisture must have got into my icing sugar because I had to sieve this: 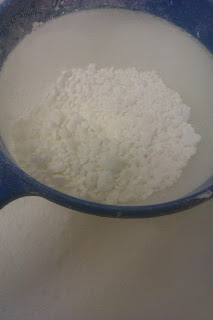 The packet was filled with balled up icing sugar, leading to a fun 30 minutes of sieving and pushing it through the sieve with a spoon. I also used a gas oven for the first time since GCSE food tech, so I had to ask my Gran which setting to put it on for a cake. Apparently gas mark 4 is about equal to 180C. How exciting.
I used the traditional strawberry jam in this recipe, but any jam will work. In traditional recipes there is no buttercream on top and it's just dusted with icing sugar, but I like buttercream and wanted to put it on top of the cake as well, so do whichever suits you. If you opt to not put buttercream on top of the cake then remember to halve all of the filling ingredients except for the jam.
Ingredients
For the cake:
For the filling and topping:
Recipe

As always, if you don't know how to do any of the things mentioned in the recipe then look at The Basics.

This is a very basic recipe and is the basis for many other sponge cake recipes. If you're feeling creative, you can take the basic cake recipe and add your own fillings and flavourings to make your own invention. A simple variation is making a chocolate cake by removing the jam and adding 2 tbsp cocoa powder to the cake and icing; if you really want to treat yourself/your fans, you could even swap the jam for chocolate spread.
For Saturday, I'm thinking about making a caramel apple pie, but I might change my mind. You'll have to wait and see!