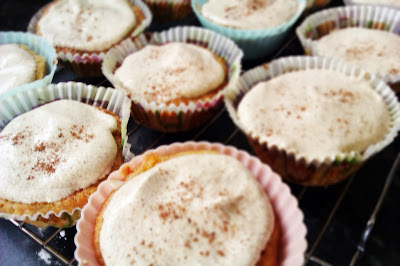 So, the second batch of cake this week is these butternut squash cupcakes. Some of you might gasp in horror at this idea, but think about carrot cake (yes, it really has carrots in it, just as these cakes really have butternut squash in them). I wanted to make pumpkin cupcakes originally, but Morrisons rarely stock anything that I want and the only type of squash that they had was butternut squash. There's nothing wrong with butternut squashes anyway, but Halloween this week put me in the mood for pumpkin type things.

Before I start to rant about Morrisons, I'll tell you about the icing for these cakes. Tired of the trials and tribulations I have recently experienced, I turned to Whisk Kid for her wonderful looking swiss meringue buttercream. I scaled the recipe down a bit and detailed it below, but for a full photo tutorial and even an explanation of why you do what you do and what do do it if goes wrong you should really visit her recipe. I stumbled on her site when I was looking for a rainbow cake recipe, and instead of finding what I wanted I found a whole host of other incredible cake recipes along with writing that puts mine to shame. I therefore strongly encourage you to check her site out, but only after finishing with mine!

I find these cakes to be wonderfully moist, and the combination of cinnamon with the squash was a good call. The icing has a very light texture and flavour, complimenting the cake well. If you think people eating your cakes might be skeptical about the butternut squash, don't tell them about it until they've eaten one of the cakes and exclaimed about their deliciousness. 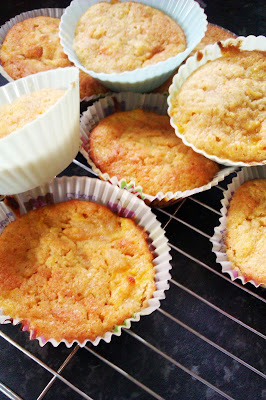 You might notice in the photograph above that I have used both paper and silicone cupcake cases. This was no genius move; the reasoning behind it is that I only possess one cupcake baking tray and this recipe makes 20, so I needed some cupcake cases that would stand alone on a plain baking tray, which is what the silicone cases do. I do prefer the silicon cases as they keep the cakes moist for longer and are reusable, but the paper cases were a present and are pretty so I'm using them up.

For the cakes:
For the icing:
Recipe 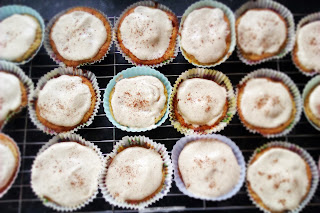 Remember that this recipe can apply to any type of squash. If you find one in the supermarket that looks interesting or there's been one lying round the house for months (yes, months - they last that long) then use that one. Experiment!

If any of the terms in that recipe are gibberish to you, take a look at The Basics.

Check back on Thursday to see the fridge cake that I'll be making for E's birthday. See you then!