This is a very simple recipe that gives a delicious and rich result. It's essentially a rocky road cake and can be altered to include your favourite sweets or biscuits, white or dark chocolate. I made it yesterday for E's birthday, which is today, so to jazz it up I threw in the mini smartie things leftover from decorating M's Cake along with some pink sparkles and some leftover rich tea biscuits from last week's cheesecake.

I first heard of fridge cake in A Level French when G brought one in. I have very fond memories of that class, and I know they were lessons but because there were only four of us it felt like a social gathering rather than something we had been forced to do. One of us would bring in a treat almost weekly, and at the end of term we would all bring in something and have a feast. Unfortunately, if you bring food into a lecture you're not at all likely to have such an experience (especially in a class of about 100).

The first time I made fridge cake was about this time last year. I think E had gone home and the boys had gone out so it mas just me and R, and somehow between gossiping and bad TV we managed to eat 2/3 of one between us. Luckily I had made two so we guiltily placed the half-eaten cake on top of the other one and tried to pass it off as designed that way. Not sure we got away with it though. 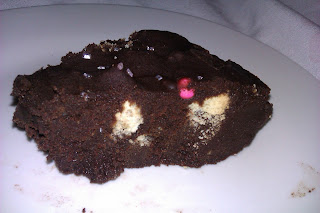 You need to make this cake a couple of hours beforehand at least, but the good thing about this cake is that it takes ten minutes to prepare tops, then all you have to do is throw it (or place it carefully...) in the fridge until you need it. I wanted to use a loaf tin for this recipe because I wanted the cake to come out very thick, but I didn't want to pay £2.99 for one in Morrisons so I just used a springform tin.

The cheesecake from Saturday disappeared by Tuesday morning, and the cupcakes followed close behind so it is safe to say that if you follow the recipes you'll satisfy anyone after something sweet; even my biggest food critic housemate loved the cheesecake (I couldn't persuade him to try the butternut squash cupcakes though, unfortunately.) 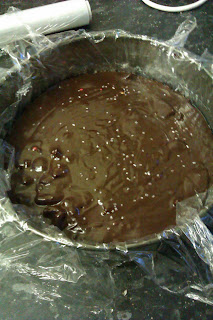 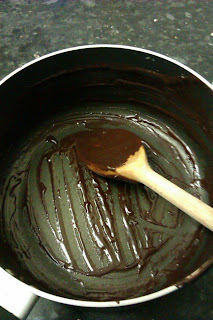 Yes, it is that simple. Even someone terrified of cooking could master this recipe in one.

I've been thinking about making a recipe I designed back in GCSE food tech on Saturday, so keep your eyes peeled.