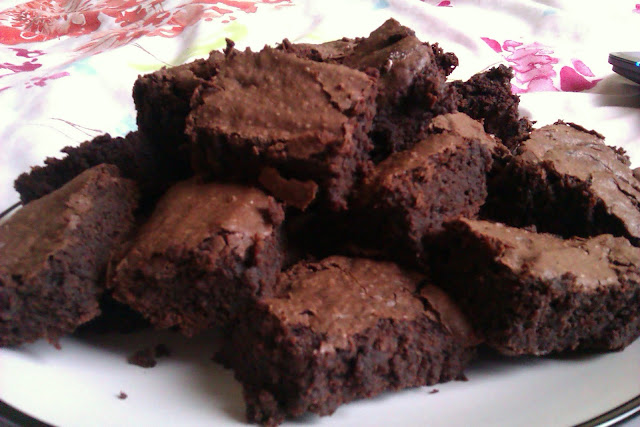 I may bake all the time but I do actually try to maintain a healthy lifestyle, so I was quite excited when Chele of Chocolate Teapot set this month's We Should Cocoa Challenge, which is to bake something with chocolate that follows a healthy theme. I'd long been considering making a healthier alternative to the gorgeous yet artery clogging chocolate brownies from Nigella's How To Be A Domestic Goddess (probably one of my favourite cook books). They are my favourite brownies by far and I always marvel at the difference between them and the consistently dry and crumbly shop variety. I can never understand why people in shops bake brownies like that; brownies should be gooey inside with a slightly crispy top and should ooze a chocolatey moreish quality (that may be something that I just made up, but brownies totally have it).

Anyway, Nigella's brownies (without the walnuts) come to 296 calories per square - a combination of the 500g of sugar, 400g of chocolate and 400g butter, I suspect. That may not sound like a lot of calories to some of you, but when you think about a whole slice of cake being about 400 calories, a small square of one of Nigella's brownies looks pretty unhealthy. If you don't care what you eat, or want to treat yourself, I do encourage you to make the original recipe though because it is amazing! 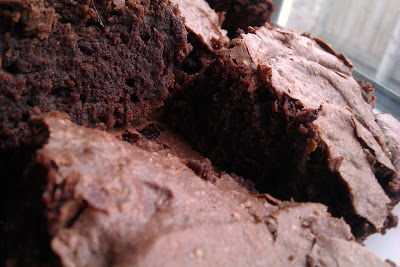 However, if you would like to try a healthier option, the brownies I made by altering Nigella's recipe came to 193 calories per square, so I've cut out 103 calories. Hooray! I did this by exchanging the butter for light mayonnaise (I got the idea for this from a recipe on the BBC's Good Food site), halving the chocolate and replacing it with cocoa powder and halving the number of eggs because as far as I can tell you don't need that many eggs in a cake, and I know that they are being partly replaced by the egg in the mayonnaise (though I'm not sure the mayonnaise would help with the combining things together, as is the egg's role in baking). I did consider using sweetener instead of sugar, but a bit of research showed that sweetener doesn't really do a lot to the calorie count. Overall, then, these brownies are lighter on the fat and cholesterol count as well as calories - not bad.

Don't be taken in by the popular idea that low fat or healthy food doesn't taste as good as the real thing. These brownies taste very, very good, and are just as gooey and tasty as the original. They could probably do with slightly more of a chocolate flavour, but that might be because I used Morrisons value chocolate and not the fancy stuff  because I'm a student and can't afford fancy anything. These are so good that I had to have a second helping. If you want more proof, make them yourself!

The vanilla mouse biscuits from Tuesday were really nice, and because they were so small they made a tasty snack to stop me feeling peckish on the train back from Plymouth yesterday. Thankfully, the horrible grey icing left over from the New Year cake didn't taste horrible on the biscuits but I still hope that I'll never have that much horrible grey icing to use up again. By the way, I had a slice of the cake on Wednesday and (having sliced some of the icing off) noticed that the red food colouring that helped to make it such an appealing slate grey has seeped into the sponge itself:


Anyway, on to better things like the recipe for these tasty, yet healthy, brownies: 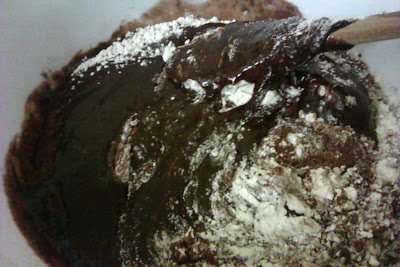 Nigella's recipe uses 180g chopped walnuts; if you wish to use them in your recipe stir them in just before you pour the mixture into the tin. 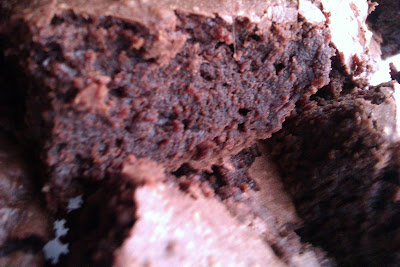 If there are any terms that you didn't understand in the recipe, please visit The Basics. and if you're a fan of the blog and want to know when I post a new recipe, feel free to like Cake Of The Week on Facebook!

This is my last post for a fortnight because I really have to knuckle down with revision for the oncoming exams now. I have a birthday in the mean time, so to celebrate both my 21st and the end of exams I plan on baking a suitably boozy pina colada cake. I'll see you then, and good luck to any fellow students taking exams this month (I think I may have wished you luck in my last post too, but here is some extra luck!)