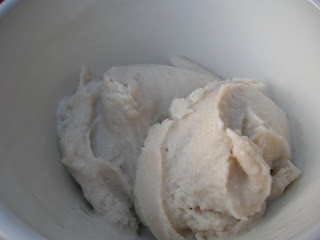 Apparently I have a banana problem: this is the third banana-themed post in just over a month.

Whenever I want to use the ice cream maker in this house I have to hunt (often without success) for its accompanying recipe book. If I find it I put it back in a logical place, e.g. next to the ice cream maker, but I assume that my family wait for me to go back to Newcastle before hiding it somewhere because it's never where I left it. Yesterday I found it stuffed at the back of the cupboard so for once I was able to peruse the recipes for ideas.

Despite triumphant retrieval of the recipe book I actually ended up using the vanilla custard recipe (under Swedish Summer Cake) from Nigella Lawson's Kitchen and kind of ad-libbed the rest.

I had already been planning to make ice cream today, but it does seem to have nicely coincided with some beautiful weather. Today it was so warm that I didn't even need a jacket, though I did forget to apply sun cream to my arms - I know it's only the UK but I still want to protect my skin because not only do I not want skin cancer but I also want to fight the ageing process (I may only be 21 but prevention is better than having to fix something later!) Saying that, apparently when my Mum was young they would slather cooking oil on themselves and despite this she looks young for her age. I won't risk it though!

The ice cream tastes of bananas, just as it should and isn't overpoweringly sweet, which I think would ruin the flavour. It's not as creamy as regular ice cream because I didn't use cream, but it was soft and smooth, reminding me of Italian ice cream. 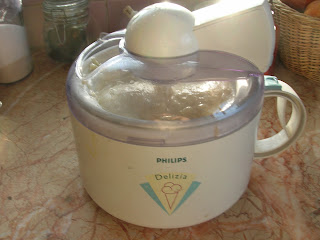 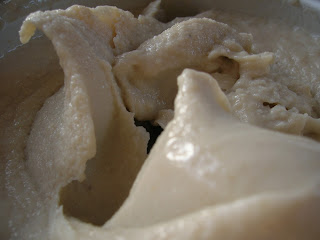 If you're not sure what to do with the left over egg whites, apparently you can freeze them for up to two weeks. I like to use them to make scrambled eggs, egg white souffle omelette (I should really learn how to do accents on here) or meringues. For help on separating eggs, have a look at The Basics.

Next on the baking list (though ice cream is hardly baking) is a lemon torta di zabaglione, so look out for that next week. Enjoy the sun while it lasts!