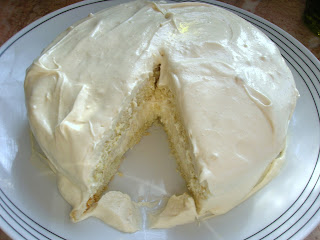 I know that I only made the chocolate version of this recipe a few weeks ago, but I couldn't miss the opportunity to try it with the limoncello that my mother has stocked up on over the past couple of years. Don't worry, as soon as I have a salary (in approximately 18 months) I'll make sure I get them a nice new bottle.

I'm not sure if making a lemon sponge alongside the lemon zabaglione has overdone it slightly, but I've not tried it yet (I'm saving myself for Chiquito tonight with C) so it's hard to tell. Having included only half the cream I previously used (I remembered the actual recipe this time!), the zabaglione tastes like it might be a bit strong so I hope the sponge mellows the flavour a bit. Update: the lemon sponge actually accents the limoncello nicely but I was right in thinking that the limoncello might be a bit strong. It really needs to be eaten with the sponge so that the sharpness doesn't hit your tongue so hard, or at least be eaten in small quantities. I think if I were to make this again I would double the cream up to neutralise the alcoholic taste slightly. My mum tried it last night and she seems to like it though, so maybe it depends on your taste. 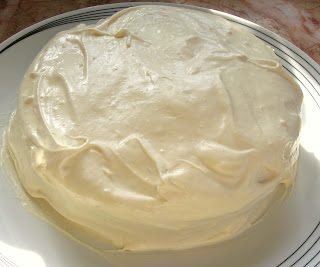 I'm very pleased with myself right now because not only have I made a Lemon Torta Di Zabaglione today, I also successfully (for the first time ever) made Swiss Meringue Buttercream. I've tried to use it a few times, notably the Butternut Squash Cupcakes where it didn't matter that it wasn't thick enough, and even made it recently (I can't remember why now because I never posted about it as far as I can see), but until today the meringue would turn soupy as soon as I added butter and would never return to being thick again. Finally I can see the glorious smoothness that everyone (Kaitlin at Whisk Kid especially) has been raving about. I finally understand why this buttercream is so good for cake decoration. This breakthrough is all thanks to Sweetapolita's Swiss Meringue Buttercream Demystified, so on the off chance that she reads this, thank you! Hopefully I'll be making a cake that incorporates this buttercream soon.

As I said, I managed to remember to use the correct amount of cream in the cake this time but, alongside the stronger alcoholic flavour, it seems to have resulted in a sloppier zabaglione. This meant that I had to put the cake in the fridge regularly while I was preparing it, and of course it needs to be stored there too. For a healthier version of the cake I'd suggest using half fat double cream instead - Elmlea Double Light is the one I always use. Using low fat butter or margarine is also something you could do to make the cake a bit better for you. 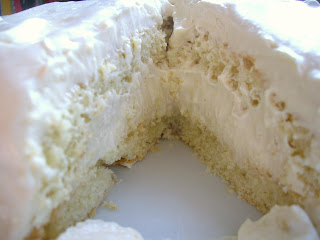 Ingredients
For the zabaglione:


For the sponge:
Recipe 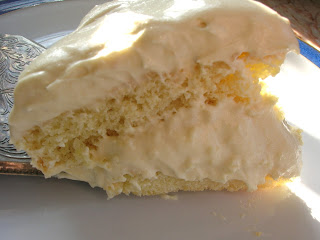 For tips on the methods described in this recipe, take a look at The Basics.
Since I can now successfully make Swiss meringue buttercream I expect I'll make something that is decorated with it at the weekend. I might still make the chocolate chip cookies, but I guess you'll have to see!