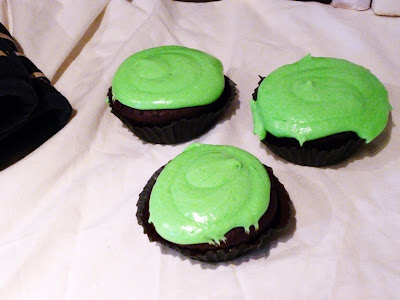 Tomorrow is St Patrick's day, which, in student culture, is a day synonymous with drinking. I therefore thought that these Guinness cupcakes would be rather fitting. They also fit very nicely into the theme for this month's We Should Cocoa Challenge, hosted by Chele at Chocolate Teapot, which is to combine chocolate with the colour green.

I detest beer (except for the smell), but Mel at Sharky Oven Gloves was so insistent that Guinness tastes good in a chocolate cake that I had to try it for myself, so I based today's cupcakes on her recipe for Movember Guinness Cupcakes. It turns out that Mel was indeed correct: these cupcakes taste like a chocolate cake but have an added undercurrent of bitterness that works to give a really delicious sponge. 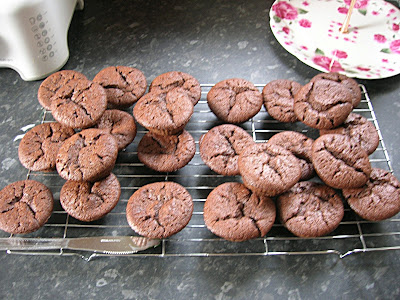 When making the icing (based on a recipe from Sweetapolita), I learned that food colouring gel is far superior to the liquid I've been using since childhood. Just a small dot of green gel produced an impressively vibrant green - well worth being twice the price of liquid colouring! Some brown sprinkles might have helped to break up the green a bit, but I only had the pink ones that we used for M's Rainbow Cake, and they would have clashed horribly.

Today I received my first proper cake stand from my mother as a very late birthday present (I couldn't find one I liked until recently). It's very pretty (from the M&S Kirsty Allsopp range for Mothers' Day, if you're interested) and I can see it coming in very useful in the future. 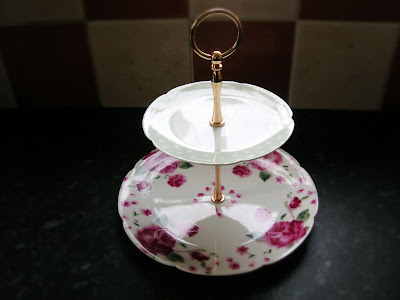 As stated above, these Guinness cupcakes are based on the recipe for Movember Guinness Cupcakes from Sharky Oven Gloves. I changed quantities, swapped oil for butter and left out the milk and sour cream. The icing is adapted from Sweetapolita's Nutella Cloud Frosting - a must try.

Makes 24
Ingredients
For the cakes: 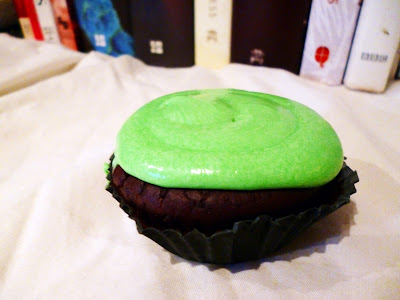 For help on anything mentioned in the recipe, have a look at The Basics.

I'm travelling home to Plymouth on Monday, which will give me access to many of the things that I crave, including real pasties (none of this Northern imitation nonsense) and cream teas. We have an ice cream maker (which I fully intend to stealthily take with me when I officially move out), so I imagine that I'll be doing a bit of experimentation on that in the coming weeks. In the past I have made things like blue marshmallow and hobnob ice cream (actually very nice) so who knows what I'll come up with? I'm also thinking of using my  parents' limoncello supply to make a lemon version of last week's Chocolate Torta Di Zabaglione, so keep an eye out for that.